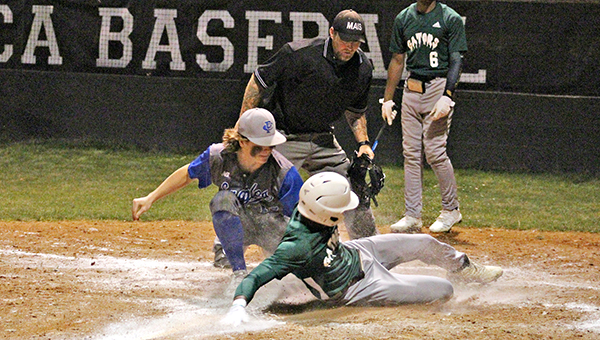 Porter’s Chapel Academy pitcher Gage Palmer, left, Datreion Kelly (3) at home plate for the final out of Friday’s game. Palmer had 14 strikeouts to lead PCA to a 9-3 victory against its crosstown foe. (Ernest Bowker/The Vicksburg Post)

When he envisions what his young lineup could become, first-year Porter’s Chapel Academy baseball coach Paul Ashley has bigger things in mind than winning a game or two in late February.

That didn’t stop the Eagles, however, from celebrating one of those wins as if it were the middle of May.

PCA (2-2) has seven freshmen — including Palmer — and only one senior in its lineup, and Ashley wasn’t shy about what it meant for the program to beat a Class 5A public school team. It was also PCA’s first win over Vicksburg in four meetings since they first faced each other in 2017.

“The kids have really come a long way and they’re starting to believe in themselves. It’s coming together and they really believe they can win,” Ashley said. “That is a momentum-getter. We got down 5-0 against Adams County Christian School the other night and came back. We lost the game 10-8 but it went down to the wire. These boys here, with all the experience they have from tournament ball since they were six years old, they’re very experienced. They’re just young. Great things can happen at Porter’s Chapel.”

Especially when Palmer is on the mound. He allowed three runs, none earned, on four hits and did not walk a batter. He threw 67 of his 97 pitches for strikes, escaped jams in the fifth and seventh innings, and even got the last out himself. After throwing a wild pitch, he hustled to the plate to tag out Datreion Kelly, who was trying to score from third base.

“It was really exhilarating. The whole team had me hyped up. They didn’t let me get down through any innings,” Palmer said.

Vicksburg starter Terrance Johnson matched Palmer for four innings, and entered the fifth with a 3-1 lead. The Gators scored three runs in the top of the fifth as Laurence Sullivan hit an RBI double and scored on a single by Kentrez Bershell.

The bottom of the fifth, though, was where things fell apart in a big way for the visitors.
Johnson hit the first three batters and was replaced by Tyler Sanders, who hit two of the first three he faced. Ashley said the plunkings were not entirely an accident, or even caused by a sudden loss of control by the pitchers.

“I noticed that their pitcher was working inside of us,” Ashley said. “So I went to the boys and told them to get up on the plate and see if they could work him outside so we could get the barrel of the bat on the ball, or he’s going to hit us and put us on. It’s up to you to stand there and take it. They stood there and took it.”

After getting one out with an RBI ground out by John Wyatt Massey, Sanders walked three batters in a row to force in a run, and another scored on a wild pitch. Porter’s Chapel scored five runs in the inning without getting a hit.

Three more walks, a dropped third strike and Osborne’s RBI double led to three more runs and a 9-3 lead at the end of the sixth inning.

“Their kid was a dog on the mound tonight. This kid can roll. We got up on him and instead of going ahead and putting him to sleep we walked the bases loaded. In that inning when things started to snowball, we just couldn’t stop it,” Calvin said. “If we could have controlled the fastball we would have won this game. We couldn’t control the strike zone with the fastball, henceforth we lost. We just walked guys, walked guys and walked guys. I think they may have had one hit all night long, so for them to have one hit and beat us 9-3, that’s tough.”