Profile 2021: Vicksburg at the forefront of world-class digital solutions 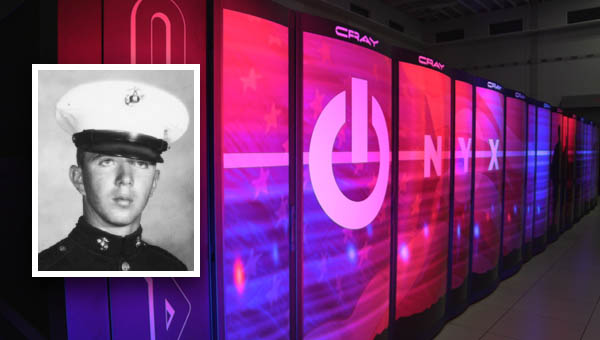 In 2020, the HPCMP and the ERDC Department of Defense Supercomputing Resource Center were awarded a $20.6 million contract for a new system that will be the world’s 15th-largest supercomputer. In a release, ERDC said it is named “Wheat” in recognition of Mississippi native and Medal of Honor recipient Roy M. Wheat, pictured above. The system also pictured above, Oynx, is one of the existing supercomputers at ERDC.

It has a big name, which in no way compares to the processing power that is contained within its walls.

The High Performance Computing Modernization Program (HPCMP), housed within the walls at the Information Technology Lab at the U.S. Army Engineer Research and Development Center, provides the Department of Defense “supercomputing capabilities, high-speed network communications and computational science expertise that enable DoD scientists and engineers to conduct a wide range of focused research and development, test and evaluation, and acquisition engineering activities.”

That processing power is once again staged to take a dramatic step forward, keeping Vicksburg at the forefront of computer processing in the world.

In 2020, the HPCMP and the ERDC Department of Defense Supercomputing Resource Center were awarded a $20.6 million contract for a new system that will be the world’s 15th-largest supercomputer.

In a release, ERDC said it is named “Wheat” in recognition of Mississippi native and Medal of Honor recipient Roy M. Wheat.

Wheat, a native of Ellisville and a lance corporal in the United States Marine Corps, was posthumously awarded the Medal of Honor for conspicuous gallantry and intrepidity at the risk of his life above and beyond the call of duty while serving as a fire team leader with the First Platoon, Company K, Third Battalion, Seventh Marines, First Marine Division, in the Republic of Vietnam.

Wheat was killed in action on Aug. 11, 1967, in a valiant act of heroism when he hurled himself upon a mine.

The Medal of Honor was presented by President Lyndon Johnson.

In addition to the supercomputer at ERDC, the U.S. Navy has a prepositioning cargo ship named for Wheat. The enlisted dining facility at Naval Air Station Meridian was named after him in 1985, and a portion of Interstate 59 is named the “Roy Wheat Memorial Highway.”

Traditionally, ERDC-housed high-performance computing systems have been named after precious minerals and gemstones such as Topaz. Wheat marks the second system to be named after a Mississippi Medal of Honor recipient, a new naming convention that includes an earlier system named in honor of U.S. Army Capt. Ed Freeman.

In a release from ERDC, the partnership between HPCMP and ERDC “puts advanced technology in the hands of U.S. forces more quickly, less expensively, and with greater certainty of success.”

Wheat’s unique “composable infrastructure” will create a flexible shared resource pool to accommodate today’s mixed workloads consisting of traditional HPC computing and today’s new approaches for AI and machine learning workloads. In addition to military and warfighter efforts, the program plays a major role in support of U.S. Army Corps of Engineers and civil works missions, including unique tasks such as aiding in the fight against COVID-19.

“The power of HPC is that thousands of processors can work collectively to solve a problem. It’s like linking 10,000 laptop computers together, trading data, each working on a piece of the problem to solve the problem in one hour that would otherwise take a single laptop 416 days to solve,” Hunter said. “The ERDC DSRC delivers world-class, high-performance computational capabilities to the DoD science and technology and test and evaluation communities to help solve our nation’s most challenging problems in military and civil engineering.”