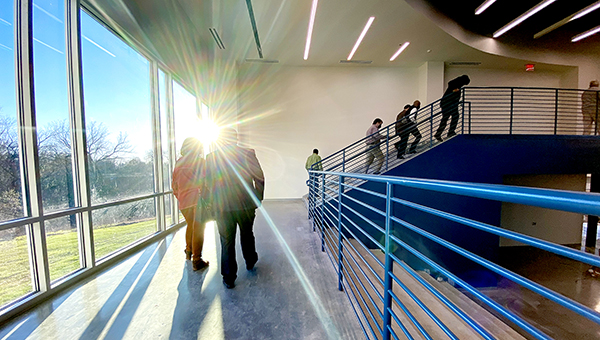 Vicksburg Warren School District officials make their way Wednesday to the second floor of the new Academy of Innovation, currently under construction. The $16.4 million project is the only ground-up new construction in the district-wide project. (Tim Reeves/The Vicksburg Post)

It was just time for a check-up.

In an hours-long meeting Wednesday, members of the Vicksburg Warren School District’s Board of Trustees went through each of the ongoing construction projects, funded by an $83 million bond initiative, with project architect Gary Bailey with Dale Bailey Architects.

The meeting also included a detailed tour of the only ground-up construction project that is part of the bond — the new $16.4 million Academy of Innovation at the corner of Mission 66 and Rosa A. Temple Drive.

From one room to the next, from one hall to the next, Trustees joined District officials in reviewing what is nearly a completed project, what some have called the most innovative junior high school in the region. But, that project — as with some others — is a bit behind on their timelines.

“One of the things that no one could anticipate is the effect COVID had on the contractors,” Superintendent Chad Shealy said. “Subcontractors were affected, which affected the timelines. No one could have seen that coming.”

Bailey, who led school officials on the tour, said any construction project comes with issues — some big, some small.

“We know things are going to happen. You plan for contingencies. You cannot cover them all, but you try to cover as many as you can and have the flexibility and make decisions and remain in budget,” Bailey said. “And right now, we are within the budget on the entire bond issue project.”

Shealy said Bailey and his team have been crucial partners — not just project managers — in the district-wide project.

“Anytime you build anything, you are going to have unknowns that arise. But again, we chose the absolute best architect for the job. They are our project managers, they have kept us aware of every single one of those issues, abreast of any changes,” Shealy said. “We couldn’t be happier with the way Gary and his team have come alongside us to make this a reality.”

Board of Trustees President James Stirgus Jr. said overall, the board is pleased with the progress being made.

“We feel the projects — the majority of them — are on schedule and overall the taxpayers will get their money’s worth,” Stirgus said. “The most important thing is not the aesthetics but the kids being able to learn in a conducive environment.”

Stirgus, who has toured the ongoing construction project at AOI, along with the other projects numerous times, said he sees something new each time he visits the new school.

“I see a combination of a building that will be finished and mimic the pictures,” Stirgus said as he looked at the nearly completed classrooms, open spaces and architectural details. “Pictures you can see, and see how well they look, but until you actually see it at work and it grows at each stage, then the pictures become reality. The kids will enjoy themselves learning in this building.”

While the district-wide project is being funded by an $83 million bond approved by county voters, additional tax credits and financial moves, a total of an estimated $140 million in work is being completed across the District.

Delays caused primarily by the ongoing pandemic have pushed back AOI’s opening. The new AOI previously planned to open in December, allowing students to transition from the school’s location on Grove Street to the new facility, but now there is not a set timeline.

Shealy said a walk-through of the project earlier in the week led to an extensive punch list that must be completed before students could move in. But, he said, it remains the plan to have students attending classes in the building before the end of the school year.

He said it is important the building be done — and done right — before welcoming students.

“Rarely do you have the opportunity to dream about what education ought to look like, how it ought to function and the things that should have been in every educational environment,” Shealy said. “This is our one opportunity to build that from the ground up, from the first image on a napkin to looking at the architectural renderings, there’s something about it becoming a reality that is absolutely amazing. “

As for the school’s current Grove Street location in downtown Vicksburg, Shealy said ideas of how it will be used once students move are still being discussed.

“We are not going to leave Grove Street vacant. I will say that there have been about four considerations of what that looks like,” he said. “We have considered multiple opportunities. It is a wonderful space. We have spent a good amount of time to get it back running efficiently and we do not want to leave it vacant.

“The commitment the board has made to that community is that it will not be left vacant,” Shealy said. “We are going to put something in it.”