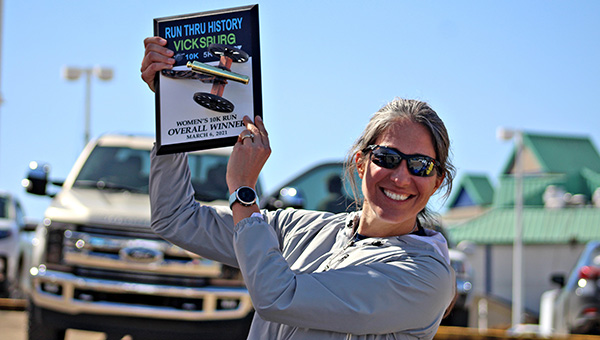 Kristi Hall holds up her trophy as the Run Thru History women’s 10K champion. Hall won the race for the first time on Saturday, after nine previous runner-up finishes. (Ernest Bowker/The Vicksburg Post)

A Champion at Last: Hall wins Run Thru History women’s title after 17 tries

For most of this century, Kristi Hall spent the first Saturday in March competing in Vicksburg’s biggest road race, the Run Thru History 10K, and watching someone else enjoy the thrill of victory.

She’d earned enough cannon trophies from the race to form a small artillery unit, finished in the top five of the women’s division in most of her 17 attempts, and finished second an astonishing nine times without winning.

Finally, Saturday was her day.

The 42-year-old Vicksburg resident, who has won the city’s other major road races multiple times each, broke through to the winner’s podium for the first time at the Run Thru History. She completed the 10K run in 45 minutes, 7 seconds, finishing just ahead of runner-up Jennifer Dantone-Smith’s time of 45:38.

“I can quit running now. I have no more goals. I’ve run Boston, I’ve done this. This is my Holy Grail,” Hall said with a laugh. “I had to wait for a pandemic, and for some of the people not to show up, and a little flatter course. I guess if you just keep showing up it will work out for you and one day you’ll get lucky.”

A confluence of events helped Hall to the win — and nearly cost her it as well.

She was aided by the absence of several top runners, including 11-time champion Keri Frazier. Then, she considered skipping the race because of a nagging injury and her son was not feeling well Saturday morning. She went anyway because she was the third member of a team.

“Once in a while everything falls into place and you just have to step up,” Hall said.

A Saturday morning mix-up could have cost her the victory, but instead only led to about 20 minutes of confusion.

While heading out the door she grabbed what she thought was her race bib from a bag, but it turned out to be the one for her son, Sam, who did not compet. The race bibs contain electronic timing chips that activate when runners cross sensors at the start and finish lines.

“They were just in the bag and I grabbed one. I thought it was mine and it wasn’t,” Hall said.

When Kristi Hall crossed the finish line, her time was credited in the scoring system to Sam Hall and she did not have an official time for herself. Because she and Dantone-Smith started the race in different waves and finished fairly close to each other, it was initially unclear who had won.

Officials from Mississippi Race Timing — the event’s official scorer — finally discovered the mistake and simply swapped the bib numbers for Kristi and Sam Hall to provide an accurate result.

“I came down and saw my number (on the results) and was like, ‘Ohhhh no’ when I saw my son’s name in my spot,” Hall said. “I couldn’t believe I just screwed that up.”

Fortunately, Hall’s victory stood and she can at last call herself a Run Thru History champion. And now that she has a large toy cannon to go with more than a dozen smaller ones for winning her age group and other subdivisions, she’s not about to stop chasing more.

“Of course,” she said, when jokingly asked if she’d run again rather than retire on top. “I can’t not run this race.”