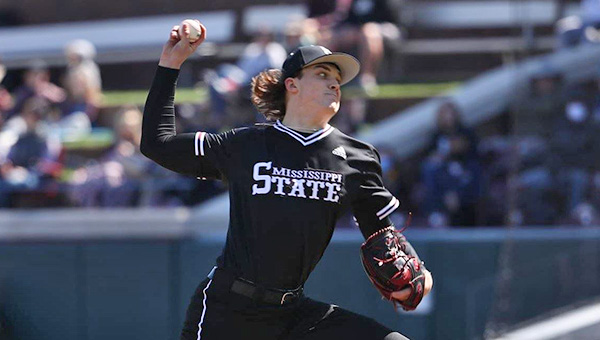 STARKVILLE — The anatomy of a no-hitter is usually pretty simple: really good pitching along with timely — and at times sparkling — defense.

On Sunday, Mississippi State mixed in a little of all of that for the program’s first no-hitter since 1999 and a 13-0 victory to earn the series win over Kent State at Dudy Noble Field.

Fristoe gave way to second-year freshman Landon Sims who worked a scoreless seventh with one walk allowed. Freshman Mikey Tepper fired 1 2/3 innings with three strikeouts, before sophomore Cam Tullar walked a batter and then got a pop out wrap it up.

Mississippi State coach Chris Lemonis said Fristoe’s high pitch count and a desire to give other pitchers some work kept him from letting the freshman make a solo run at the no-hitter. Fristoe threw 87 pitches in six innings.

“When (Fristoe) got to 85 pitches we felt like that’s where we wanted him at. He’s got such a bright future and you don’t want to push him, and the game was still in check at that point,” Lemonis said. “Tip your hat to all our pitchers today and we made three amazing plays on defense to keep that no-hitter intact.”

The offense had an impressive day, as well, with the 13 runs coming on 16 hits and six walks. Four Diamond Dawgs posted multi-hit games, led by Kamren James with three hits and five RBIs.

James hit his fourth home run of the season in the fifth inning.

Overall, 12 players reached base with 11 collecting hits. Rowdey Jordan had a pair of hits, walked twice and scored two runs, while Josh Hatcher and Lane Forsythe each chipped in two hits.

Tanner Allen moved his reached base streak to 11 games with a single. He scored two runs and drove in one.

Mississippi State (8-3) won for the fifth time in six games, with the one loss in that stretch coming Saturday against Kent State.

“I thought yesterday was our worst game of the year and today was our best,” Lemonis said. “I give the guys a lot of credit for bouncing back and being mentally ready to go.”

Ole Miss 8, Belmont 7
Ole Miss hit four home runs on Sunday, but its biggest hit of the game was a humble single.

Hayden Dunhurst hit a walk-off RBI single in the bottom of the ninth inning to give the Rebels a win and a series sweep over Belmont.

Elko hit five home runs in the series and was 10-for-17 in five games this week.
Belmont rallied for three runs in the top of the ninth inning to tie it, however, forcing Ole Miss to rally again in the bottom half.

Bench hit a one-out single, went to second on a wild pitch, and then scored on Dunhurst’s single to win it.

The Golden Eagles (6-5) won their third straight weekend series to start the year.

McGillis hit a two-run home run in the second inning and Trimble added a solo shot in the third to stake Southern Miss to a 3-0 lead.

USM pitchers Ben Etheridge, Ryan Och (2-0), Tanner Hall and Garrett Ramsey scattered seven hits and one run, and combined for nine strikeouts. Och earned the win with two innings of scoreless relief, and Ramsey worked the ninth inning for his third save of the season.