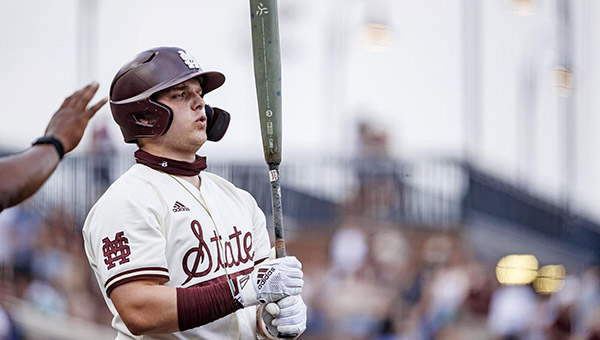 Logan Tanner hit a three-run home run in the bottom of the ninth inning to give No. 2 Mississippi State its third walk-off win of the season, 4-1 over Eastern Michigan.

A solo home run by Eastern Michigan’s Taylor Hopkins in the fourth inning accounted for the only run of the game before Mississippi State (12-3) came to the plate in the bottom of the ninth.

Tanner Allen started the winning rally with a leadoff single, and scored the tying run on a base hit by Luke Hancock. In between them, Kamren James was hit by a pitch. Logan Tanner then hit the first pitch he saw for the game-winning home run.

“I just think we don’t quit,” Mississippi State coach Chris Lemonis said. “We talk about, in the ninth inning, just moving the lineup and having the next guy move to the plate. When Tanner (Allen) gets that hit, you feel that energy in the ballpark. Then, you get that hit-by-pitch and there’s more. It just gets hard to pitch. It gets hard to defend here when you have that energy going. We had some guys take some big swings.”

Former Warren Central star Carlisle Koestler (2-0) pitched three innings of scoreless relief to earn the win for the Bulldogs. He allowed one hit and no walks, and had two strikeouts while retiring the last eight batters he faced.

Ole Miss 6, Louisiana-Monroe 5
Kevin Graham hit a two-run, walk-off home run in the bottom of the ninth inning to give No. 3 Ole Miss (13-2) a thrilling victory over Louisiana-Monroe (5-6) Saturday in Oxford.

It was Ole Miss’ third walk-off win of the season.

Mason Holt singled in the tying run and scored the go-ahead run on a double steal to put Louisiana-Monroe ahead 5-4 in the top of the eighth inning.

In the bottom of the ninth, Tim Elko was hit by a pitch with one out and Graham followed with his home run over the right field fence for the game-winner.

It was Graham’s fourth home run in five games. He finished the game 4-for-5 with four RBIs. Elko had two hits and scored three runs.

Holt went 2-for-4 with a triple, one RBI and three runs scored for ULM, while Ryan Humeniuk was 3-for-4 with three RBIs.

Ole Miss now won back-to-back series since dropping the home opener vs. Central Florida, and ran its winning streak to eight games. It will go for the sweep of ULM Sunday at 1:30 p.m. at Swayze Field.

Powell retired the first 11 batters he faced before giving up a single up the middle to Bobby Lada with two outs in the fourth inning.

Powell (2-1) allowed just three hits in the game and struck out 10, while not allowing a walk. Louisiana-Lafayette (9-7) did not get a runner past second base against Powell.

Garrett Ramsey, who came on for Powell to open the ninth, gave up a long single to left before getting a double play ground ball and a strikeout to end the game in earning his fourth save of the year.

Gabe Montenegro opened the first with a single to right for the Golden Eagles (8-5) and, after two wild pitches, scored on a ground-rule double by Christopher Sargent to account for the game’s only run.

The series finale is set for Sunday at 1 p.m. at Pete Taylor Park in Hattiesburg.

After an uneven start to the season, Hinds Community College seems to have found something that works. Connor Carter and... read more