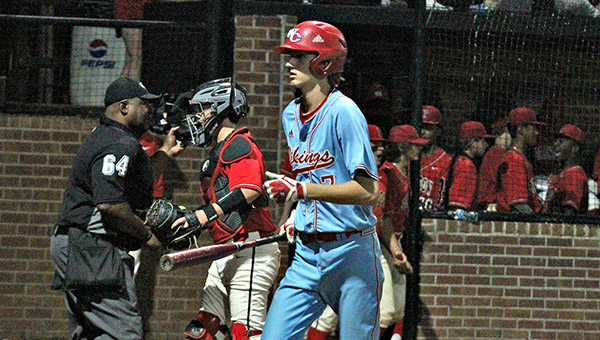 Warren Central’s Preston Lynch walks off the field after making the final out in Friday’s 7-1 loss to Brandon. (Ernest Bowker/The Vicksburg Post)

BRANDON — Warren Central fought hard, did not give in, and did not let the game slip away when it easily could have Friday night.

That was the good part.

The bad part was, it wasn’t enough to score a victory.

Jacob Keys hit a grand slam with two outs in the second inning, and three pitchers combined to rack up 16 strikeouts as Brandon beat Warren Central 7-1 in the first half of a home-and-home series.

The teams will play again Saturday at 1 p.m. at Warren Central’s Viking Field.

Keys’ home run followed an RBI single by Colton Hegwood and gave Brandon a 5-0 lead. Keys also hit a two-run single in the fourth inning to make it 7-0, and finished 2-for-2 with six RBIs.

“The five-spot in the second was really the dagger. It was probably their best hitter, had them loaded, nowhere to put him, we throw a mistake and he hits it out of the ballpark. That’s baseball,” Warren Central coach Randy Broome said.

Although they never led, Broome added that he was happy with the way the Vikings limited the damage after the big second inning. Braxton McCurley homered in the sixth for their only run, and Seth Sterling pitched three innings of scoreless relief.

“We could have easily hung our head, and that’s been our M.O. all year long. We’re in it and then the wheel pops,” Broome said. “I thought we stayed in it for the game. We kept our nose in it and kept fighting. We’ve got a long way to go and a lot of things to fix. But at the end of the day, if you show up fighting the coaches can go home and sleep a little easier.”

Will Martin started on the mound for Brandon and had 11 strikeouts in four innings. He was followed by Kandin Williams and K.K. Clark. None of the Brandon pitchers walked a batter.

Warren Central (1-7) lost its second straight game, but will have a few more chances to straighten things out before its MHSAA Region 4-6A opener against Clinton on March 30.

The Vikings will host Pisgah and Germantown on Tuesday, at noon and 6 p.m., respectively, in the Bluff City Brawl spring break tournament. They’ll also go on the road next Thursday to play Tri-County Academy in a make-up game of an earlier rainout.

With a roster full of young players who did not get a lot of experience in the COVID-shortened 2020 season, Broome said he’s mostly trying to gain some consistency and momentum over the next couple of weeks.

“At the end of the day, it’s really to put seven innings together. Guys throwing strikes and making routine plays. That’s what keeps you in baseball games no matter who you play,” Broome said. “If we can’t throw strikes and we can’t make routines, we don’t have a chance. I don’t care if it’s the Bad News Bears. But when we do come in and do that, it doesn’t matter who we’re playing either.”