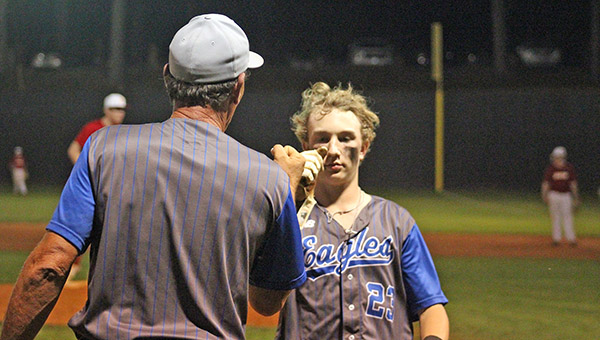 John Wyatt Massey had a game — and a moment — that he’ll never forget Friday for Porters’ Chapel Academy.

The freshman catcher hit the first home run of his high school career in the first inning, added a bases-clearing double in the second, and finished with six RBIs as the Eagles routed Benton Academy 13-3 in their district opener.

Massey finished 2-for-2 with the two hits and two walks.

“I’ve been getting up under it a lot. I finally worked hard enough and leveled it out, put a swing on one and it went out,” Massey said of his two-run home run over the right field wall. “There’s no feeling like it. It’s the best feeling on Earth right there.”

Massey’s home run and double accounted for two of PCA’s five hits. They didn’t need more because Benton’s pitchers walked 15 batters. Six of the walks came with the bases loaded, and PCA’s final run scored when Brayson Morson was hit by a pitch with the bases loaded in the bottom of the fifth inning.

Every PCA starter walked at least once.

PCA pitcher Gage Palmer, meanwhile, walked three batters and allowed three runs — one earned — on four hits, but struck out seven and earned the win as PCA (3-5, 1-0) got an early leg up in the MAIS District 4-2A race.

“It’s always good to get a district win, especially the first one. District wins are what really matters. It’s what gets you in the playoffs,” Massey said. “We’ve got all those (other games) behind us and those are learning points, and the next few we’ll know how to deal with them.”

Just as importantly, PCA bounced back from several recent lopsided losses. It had been shut out twice and outscored 35-1 in three losses to Cathedral and Central Hinds over the previous week.

“It was very important to fight back after two losses like we had this week,” PCA coach Paul Ashley said. “We’re a young team and we’re learning from our mistakes. We come back the next day at practice and work on what we messed up in those games, and as you see the guys executed well tonight.”

PCA will play two district games next week, Tuesday at Greenville-St. Joseph and Thursday at home against the Irish. Before then, it will take on crosstown rival St. Aloysius Saturday at Bazinsky Field.

PCA and St. Al will play four games in a day-long baseball marathon — a seventh- and eighth-grade doubleheader starting at 11 a.m., a junior varsity game at 3 p.m., and finally the varsity at 5.

Although it is not a district game, Massey said beating the Flashes was a big goal.

“Playing Vicksburg, St. Al, any of those teams are special. You want to be the best in Warren County. So we’ll give it everything we’ve got tomorrow to pull out a win,” Massey said.

BRANDON — Warren Central fought hard, did not give in, and did not let the game slip away when it... read more