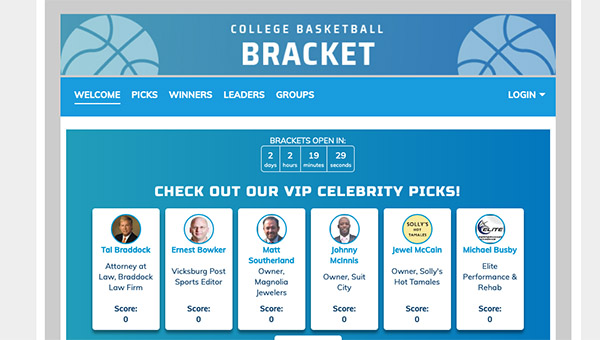 I still remember, fondly, the first time I ever filled out a bracket for the NCAA men’s basketball tournament. It was 1993. I was a junior in high school and didn’t know a lot about college basketball, which somehow always seems to work out in your favor for this thing.

I picked three of the four Final Four teams — North Carolina, Kentucky and Kansas. My fourth pick, Georgia Tech, lost in the first round but I immediately picked Michigan as a replacement and they made it. I nailed the epic upset of No. 15 seed Santa Clara beating No. 2 Arizona and picked about 40 of the 63 games correctly.

For the next 27 years I’ve been chasing that high. I’ve had good tournaments and bad, won a couple of office pools and been dead-on with some surprising teams like Florida’s championship run in 2006 and Butler’s stunning Final Four trip in 2010, but by and large those moments of glory have been fleeting.

My checkered history of picking a quality bracket made me cringe when our publisher here at the Vicksburg Post, Catherine Hadaway, asked me to be a “celebrity picker” for our upcoming “College Hoops Bracket Challenge.” As someone who enjoys competition, it’ll be fun. As someone with the title of sports editor and is assumed to be an expert, it could be a recipe for disaster.

Thankfully, my ego has taken a bruising many times in my life and likes to quote Captain America by saying, “I can do this all day.”

The College Hoops Challenge is a free online contest with prizes awarded to the winners. If you beat incredibly long odds and pick a perfect 64-team bracket, you’ll win $1 million. Other prizes include a PlayStation 5 and gift cards.

To play, register at vicksburgpost.com/upickem and fill out your bracket after the 68-team field is announced Sunday at 5 p.m. Picks must be submitted by March 19 at 10:45 a.m., before the first-round games begin. If your picks bomb out, don’t worry — you can pick a fresh bracket beginning with the Sweet 16 and Final Four, with new prizes for each reset.

Besides competing against people from all over Mississippi and the country, you can also set up groups among friends or colleagues to see who can pick the best bracket. So if you want to pick a bracket based on who has the cooler mascot or uniforms, go right ahead. It’s all free, and mostly for fun.

You can even see if you can defeat me and other celebrity pickers who probably don’t know as much about this stuff as we think we do. This has been a chaotic year in college basketball, where most of the traditional powers like Kentucky, Duke and North Carolina are likely to miss the NCAA Tournament or be marginal teams at best. That just means it’s anyone’s year to win, though — maybe even yours — so join us in seeing just how good (or disastrous) a bracket you can pick.

John Wyatt Massey had a game — and a moment — that he’ll never forget Friday for Porters’ Chapel Academy.... read more