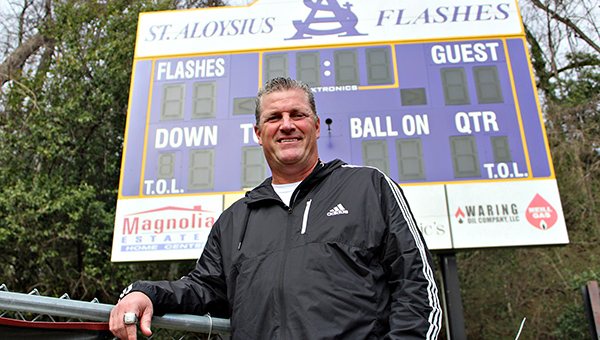 St. Aloysius football coach Stacy Sizemore poses for a photo in February 2020. Sizemore announced Monday that he is leaving St. Al after one season and moving to Florida to be closer to his family. (Ernest Bowker/The Vicksburg Post)

Stacy Sizemore returned to his hometown of Vicksburg a couple of years ago and reconnected with his roots. A different sort of homecoming is once again pulling him away.

Sizemore said Monday that he is stepping down from his job as St. Aloysius’ head football coach effective April 1. He plans to return to Florida, where he coached for more than a decade, to be closer to his family that lives there.

Sizemore’s father, Jim — who coached at Warren Central, Vicksburg High and Porter’s Chapel Academy in a nearly 40-year career — died in early November at the age of 85. Jim Sizemore and his wife Barbara had settled in central Florida after retiring in the early 2000s, and Stacy Sizemore said he wanted to move back to help care for his mother.

“I feel like this is the right thing to do. I enjoyed my time at St. Al and this was a hard decision,” Sizemore said. “I’ve just been doing a lot of soul searching. I’m thinking about my mother. She’s getting up in age and since my father died she is alone for the first time in their marriage. I just felt that it was the right thing to do, and my family is all in Florida now.”

Stacy Sizemore coached at several high schools in Florida over a span of nearly 25 years before returning as an assistant at Vicksburg High in 2019. He was hired as St. Al’s head coach in February 2020. In his one season, St. Al finished 4-6 and reached the MAIS Class 5A playoffs.

St. Al scored one touchdown in its first six games in 2020, but averaged 34.6 points over a three-game stretch late in the season to earn its seventh playoff berth in eight years.

“I’m proud of the kids for the way they competed every week. They gave us 100 percent every week, and gave everything they had,” Sizemore said. “We got better every week. I’m most proud of our players and coaches and the way they continued to work throughout the season. We never let up. Our kids and our coaches never let up, even though there were plenty of times they could have thrown in the towel.”

St. Aloysius athletic director Mike Jones said the search for Sizemore’s replacement would begin next week, when the school’s staff and administration return from spring break. Jones praised the job Sizemore did last season, and said he understood the coach’s reason for leaving. Jones added that

“We were excited and felt like he was going to be here a while, but when his father passed away and his mother was alone down there we understood from talking to him that this was a possibility,” Jones said. “We’re very satisfied with what he did. You don’t always look at wins and losses. You look at how the kids react to a coach, and they reacted very well to him and showed a lot of discipline on the field.”

Sizemore said he already has a job lined up in Florida. He will become the head coach at the Canterbury School in Fort Myers, where he previously spent one season as the head coach in 2015.

Sizemore said that, after his father’s death, he reached out to Canterbury’s head of school and his friend Rick Kirschner to talk more about life than football or relocating. The head football coaching position happened to open up recently, however, and given his family situation Sizemore said it seemed like the right move to make.

“I wasn’t looking to move. I was thinking of maybe taking a year off from coaching. This just opened up and it seemed like the right thing to do,” Sizemore said.

Sizemore added that, while he is leaving to take care of his family, he is also saddened that he’s leaving his St. Al family behind.

Sizemore grew up in Vicksburg, graduated from Vicksburg High, and has had friends at St. Al since he was a child. When he was hired last year, Sizemore talked about his familiarity with the school and its traditions. After coaching there for a year, he said his fondness for St. Al only grew stronger.