Supervisors honor Dr. Moore for his ‘years of service’ 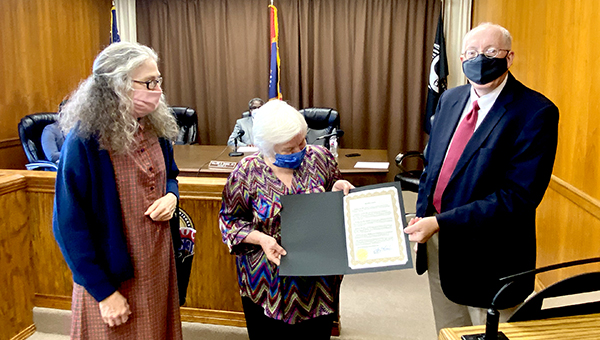 With some of his family in the room, including his widow Betty, the Warren County Board of Supervisors on Monday presented a proclamation honoring the life and service of Dr. Jim Moore, who died in December.

Moore, who spent a career in education, including time as deputy superintendent of education with the Vicksburg Warren School District, was honored for his service to the community and his role in supporting the efforts of the Warren County Election Commission.

According to the proclamation, Moore began working with the commission in 2008 as an election support specialist. His primary role, the proclamation read, was programming and troubleshooting the electronic voting machines.

“He was instrumental to the success and integrity of Warren County’s election process,” Board President Dr. Jeff Holland said in reading the proclamation. The board, Holland said in approving the proclamation, expressed their condolences to the family for their loss and “express appreciation of years of service to this board, the election commissioners and this community.”

COVID vaccine to be available for all Mississippi residents