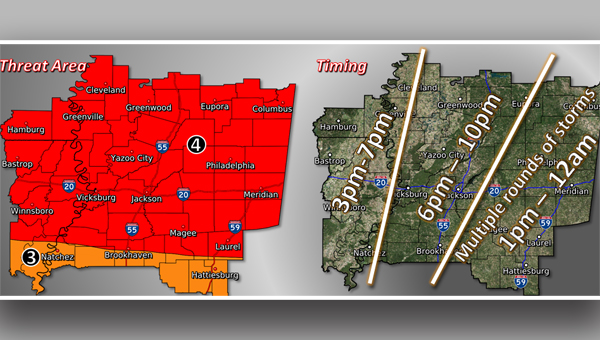 Some storms could hit the area early Wednesday, but forecasters say the biggest threat for severe weather is expected later in the day.

“The main risk will be tomorrow afternoon, so for in your area it could be as early as 3 o’clock going to 6 or 7,” said Joanne Culin, a meteorologist with National Weather Service Office in Jackson. The storms, she said, are expected to be quick-moving.

“We are looking at a pretty significant severe weather risk,” she said. “Tornadoes likely, some strong and long track, damaging winds and large hail, some of it probably baseball size.” Tornadoes, she said, “are a big risk.”

The area can expect 60-70 mph wins with the storms, Culin said, adding things will be windy Wednesday with wind speeds of about 45 mph before any storms develop.

He cautioned, however, the storms may not hit exactly as predicted.

“It’s not an exact science; it could go either way,” he said. “The bottom line of the story is we are probably going to see a significant weather event tomorrow beginning sometime tomorrow afternoon or late morning going through tomorrow evening and now it the time for people to get ready.”

Elfer said the hurricane-force winds and tornadoes forecast to accompany the storms could result in trees down, power outages, damage to property and injuries.

He said people need to have multiple ways to receive weather warnings, pay attention to radar, have an emergency with enough supplies to sustain a family for 72 hours, have cell phone charges, cars filled with gas, canned goods and non-perishable foods and make sure they have adequate shelter.

“If you’re living in a mobile home or if you’re living in a place that is not adequate for shelter, now is the time to start making those arrangements to go somewhere else,” Elfer said. “The National Weather Service does not use words like ‘significant’ or ‘severe’ lightly.”

For 80 years, the Strand Theatre has been a city landmark that provided a venue for Vicksburg residents to enjoy... read more