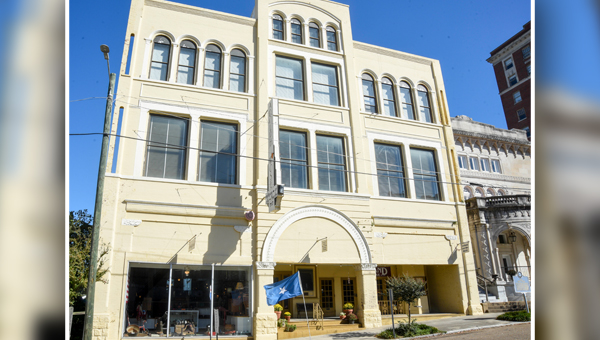 The Adolph Rose Building is located on Clay Street in downtown Vicksburg.

For 80 years, the Strand Theatre has been a city landmark that provided a venue for Vicksburg residents to enjoy live plays and watch films from across the globe.

The theater, built in 1934, is part of the Adolph Rose building that was purchased in 1992 by Malcolm Allred, who in 2013 allowed the Westside Theatre Foundation to use the Strand to present live plays and movies.

“We cleaned, remodeled it and added heat and air conditioning,” he said. “He was charging us minimal rent; he was letting us be there.”

The group, Boone said, had a year-to-year agreement with Allred that expired in January when Allred sold the building to Dr. John Fagan and his wife, Lori. Now, members of the Westside Theatre Foundation are wondering if they will have continued access to the Strand.

“We’re still waiting to see what will happen or not happen with the Strand,” Boone, who has shown films at the theater, said. “We’ve heard they’re putting a spa in the building but weren’t going to use the Strand space. It’s been a theater for 80-something years now. It’s got configured seating, a stage; it’s hard to do anything else in it.”

Boone said the foundation hopes to be able to continue using the facility.

Lori Fagan said she and her husband have met with Burns about the Strand. She said the couple’s plans for the Adolph Rose building remain under discussion but a spa is not planned for the portion that holds the Strand.

“We have a lot of things on board for the main part of the building and a spa is one of them but as far as concrete (plans) we don’t have any, but that (a spa) was never talked about in the Strand,” she said.

As they wait, the members of the Westside Theatre Foundation are looking for venues.

“This is the time of year when we begin our programming,” Boone said. “We do have a couple of programs lined up. We’re partnering with some other nonprofits and with businesses and I’m going to present two films, actually two programs, of Oscar-nominated short films at the Southern Cultural Heritage Center. That will be our first programming of the season April 17 and 18.”

An outdoor film is also planned later for Martin’s at Midtown.

“We were in live rehearsal for ‘Little Shop of Horrors,’ (when the pandemic hit),” Boone said. “That was one year ago. It’s still in limbo and we’re hoping to present that.”

For the past 5-to-6 years at the Strand, “We averaged one program a week. Most were movies, but we also had plays and concerts,” Boone said. “We’re thankful the Strand has been our home for eight years and we’d like to go back home,” Boone said. “If we need a new home, we’re thinking about that; we’re looking at options.”

He would like to find a location downtown to attract people to the downtown area.

“We are looking around to see if there’s something we can turn into a temporary site,” he said.

The Adolph Rose building was named for Adolph Rose, a dry goods merchant who built it at a cost of $30,000 — about $929,571 today. Construction on the four-story building began in 1896 and was completed in 1897. The right side of the building was remodeled into the Strand Theater in 1934.

Rose’s business was the building until 1935 when it was bought by Feld Furniture, which stayed in the building for about 40 years.