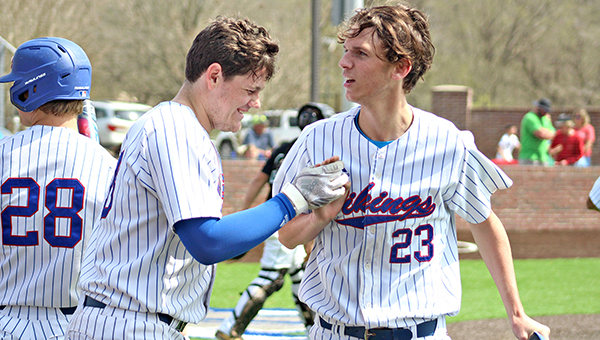 Warren Central's Spencer Elwart (23) gets a high-five from teammate Mayson Shealy (13) after scoring a run in a 10-0 win over Pisgah on Tuesday. (Ernest Bowker/The Vicksburg Post)

Warren Central didn’t hit the ball the way it wanted to on Tuesday. Then again, it didn’t need to.

“We didn’t hit like we should have. It’s an approach thing that we work on every day. It gets frustrating, but at this point in time absolutely we’ll take it,” Warren Central coach Randy Broome said. “We preach quality at-bats. A batting average will lie to you. A QAB is our goal every time we come into the box, and we try to get 60 percent on that. I’m pretty sure we hit that today.”

Warren Central scored in all but the last inning of the five-inning, mercy rule-shortened game. It broke things open with five runs in the fifth, when an infield hit by Ismael Trujillo was the only hit.

Pisgah’s starting pitcher Jackson Swales walked four batters, hit another with the bases loaded, and unleashed two wild pitches in the inning. Reliever Ty Cothran also walked a batter and hit one with the bases loaded. When the dust settled, Warren Central was ahead 6-0 and well on its way to an easy victory.

“We’ve been trying to preach battling in the box and to hit strikes, not necessarily your pitch,” Broome said. “Just putting the ball in play and making things happen has been a struggle for us, so I thought that part of our game was better.”

Elijah Gonzales drove in two runs with a single and Braxton McCurley hit an RBI single, both in the fourth inning, to push the lead to 10-0. McCurley singled, walked and was hit by a pitch in three plate appearances.

Trujillo also reached base three times, drove in one run and scored two.
On the mound, Mayson Shealy pitched a five-inning shutout. He scattered four hits and one walk, struck out four, and did not allow a runner past second base.

“He threw strikes like he always does. When he’s on the mound he gives us a chance no matter who we’re playing,” Broome said of Shealy.