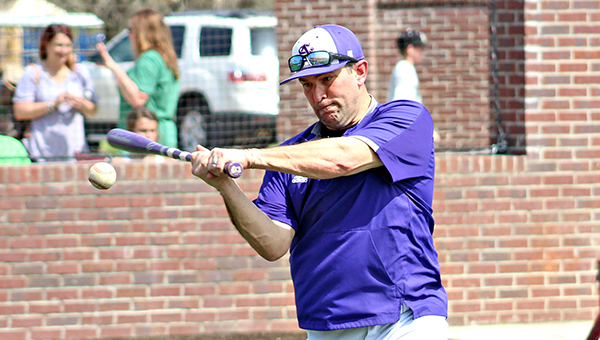 St. Aloysius baseball coach Sid Naron hits a round of infield to his players before Tuesday's game against Pisgah. (Ernest Bowker/The Vicksburg Post)

Flashes are mashing as they head toward district schedule

The full story of their season has yet to be written, but for the moment one thing is certain — the Flash can mash.

St. Al scored 10 runs or more in five of its last six games, and was on its way to reaching that total again on Tuesday when its game against Pisgah was called after two innings because of lightning. The Flashes were ahead 6-1 in their final game of the Bluff City Brawl spring break tournament. The stats from the game will count, but not the result since it did not reach the five innings necessary to be considered an official game.

The Flashes (10-3) are averaging 11 runs per game during their hot streak, and nearly nine per game at the halfway point of the season.

“The biggest thing is just that, offensively, we’ve moved some guys around the lineup and they’re starting to gel together,” St. Al coach Sid Naron said. “It seems to be working for us. But just like last week, you lose focus for one day, one game, one pitch and it can turn it around.”

The lost focus Naron referenced was a 1-0 loss to Hillcrest Christian in game one of a doubleheader last Friday. That was sandwiched around an 18-0 blowout of the Cougars the previous day, and an 18-1 victory in game two of the doubleheader.

It was their only slip-up in the past two weeks. They are hitting .360 as a team in the last seven games and have scored 79 runs.

Wes Warnock has been the team’s leading hitting during the recent hot stretch. He’s batting .571 in the last seven games, with eight RBIs, and is one of five starters batting .360 or better for the season.

Warnock was 2-for-2 with an RBI single and a run scored Tuesday against Pisgah. St. Al plated five runs in the bottom of the first inning, and had another in and two runners on in the second inning when the game was called.

Naron credited his older players for stepping into bigger roles.

“The leadership is there. These guys have really stepped up and taken on those roles. And with as great of assistant coaches as we have, we have really great leaders and that’s a good thing,” Naron said.
Strangely, for as hot as the Flashes have been when they’ve won they’ve been just as cold when they lose. In three losses they’ve been shut out twice and been outscored 20-2.
Naron brushed those off as isolated struggles.
“It’s been a Jekyll and Hyde thing for sure,” Naron said with a laugh. “It’s the adjustments being made in-game. I think we’re further along now. I always measure the 20 at-bat rule. When guys get those 20 AB’s into the season we start to really see what kind of hitters we have. We feel like we know where we’re headed offensively and hopefully we put those behind us.”

What’s ahead of the Flashes is too daunting to look in the rearview mirror — or rest on their laurels. The heart of the MAIS District 3-4A schedule looms now that spring break is over. Three-game series with perennial state powers like Simpson Academy, Hartfield Academy and Central Hinds will determine whether St. Al even makes the playoffs or not, let alone contends for a the MAIS Class 4A championship.

Up next is a single game Saturday at Porter’s Chapel Academy, at 5 p.m. St. Al won 12-2 when the teams played last weekend. Naron said the recent hot streak has given the Flashes a boost heading into the district schedule.

“We needed some momentum,” he said. “We’re about to embark on this district run. It’s some very solid competition with Simpson and Central Hinds and Hartfield. I think this is definitely preparing us for this week and the weeks to come.”

Zach Ashley hit two doubles, including one that drove in a run during a big sixth-inning rally, and Porter’s Chapel... read more