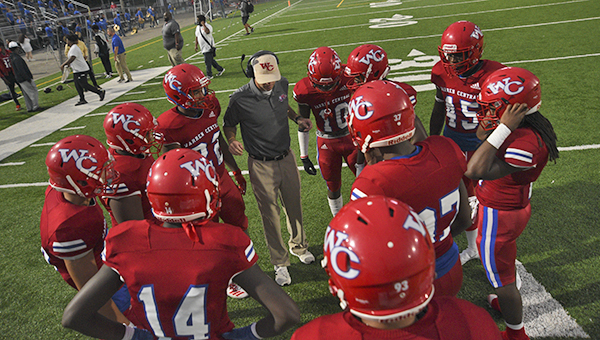 Warren Central football head coach Josh Morgan huddles with players before a game last season. Warren Central announced this week that it will play its spring game against Laurel on May 14, at Southern Miss' M.M. Roberts Stadium in Hattiesburg. (Courtland Wells/The Vicksburg Post)

The school announced it will take on Laurel on May 14 at 7 p.m., at “The Rock” — Southern Miss’ M.M. Roberts Stadium — in Hattiesburg. It’s part of a two-day high school football festival at the stadium in which a number of teams will play their spring games.

Warren Central head coach Josh Morgan said he did not know his team’s opponent when he agreed to play in the game, but the opportunity and experience of playing in a Division I college stadium seemed too good to pass up.

“They reached out to us to see if we were interested, and I thought it would be a great opportunity for our guys,” Morgan said. “It’ll be something to look forward to being a part of. I knew the guys would enjoy playing in a venue like that, and it gives them some exposure to college coaches. It’s nothing but positives.”
For the past few years, Warren Central has played a spring game on campus against either Northwest Rankin or Brandon, played under regulation rules. The format of the game against Laurel has not yet been determined. Teams often tweak the rules for spring games to limit contact or maximize the amount of reps players get.

Facing Laurel at a neutral site will present a different experience to finish the spring practice period.
Warren Central and Laurel have never played each other in a regular-season football game. Laurel, a Class 5A power, has played in four state championship games since 2007. It finished 9-4 last season and lost to eventual Class 5A champion West Jones in the second round of the playoffs.

Warren Central is coming off a 7-3 season in which it reached the second round of the Class 6A playoffs.
Morgan said the spring finale is more about evaluating his own team than necessarily trying to win. It will, however, launch the program into a new era.

The Mississippi High School Activities Association’s realignment for the 2021-22 seasons shifted Warren Central into Region 3-6A and the South half of the playoff bracket for the first time in 25 years. The move brings with it a brand new slate of opponents for the next two seasons, including Hattiesburg-area schools Oak Grove and Petal.

“The spring game is never about who we’re playing. I know (Laurel) is historically a good program and we’ll get to compete and put guys in different situations,” Morgan said. “We will take that Pine Belt trip and get to experience that for the first time and see what we’re looking forward to for the next couple of years.”

Warren Central will begin its varsity football spring practice period on April 16, leading up to the spring game on May 14.

The junior high and eighth- and ninth-grade teams, meanwhile, will have spring practice together from April 6-23. Those teams will practice at Warren Central High School.

Flashes are mashing as they head toward district schedule

The full story of their season has yet to be written, but for the moment one thing is certain —... read more