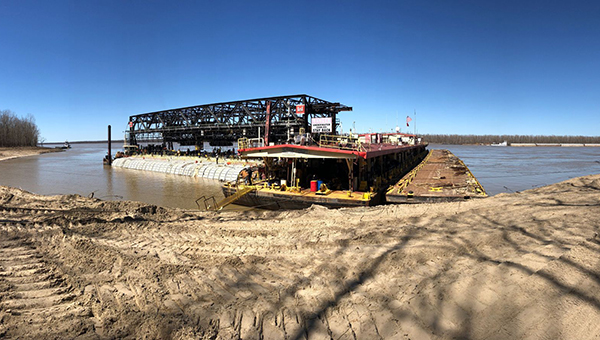 The Mat Sinking Unit is pictured in Adams County on March 3, the second-to-last day of the 2020 revetment season. (Photo by Viviana Berrios Williamson)

The Mat Sinking Unit placed approximately 266,000 squares of articulated concrete, also known as revetment, along the Mississippi River before its return to the Vicksburg Harbor on March 6 after 230 days of deployment, the second-longest deployment in 25 years. Combined, the mats would cover roughly 600 acres. In contrast, more than 167,000 squares were placed during last year’s season before early termination due to high water conditions. Revetment prevents riverbank erosion, protects flood control structures and provides reliable waterways for commercial navigation.

A continuous mask mandate was in place when physical distancing could not be achieved, and frequent rapid COVID-19 tests were provided to mitigate virus exposure. The tour of duty was increased from 12 days on the vessel to 25 days with eligibility for three days off at the end of each cycle, which limited crew members’ contact with non-USACE personnel throughout the season.

Crew members were also provided with designated transportation to and from work sites, which eliminated possible exposure from using numerous personal vehicles.

“We are incredibly proud of our crew for completing a phenomenal season despite unprecedented circumstances,” USACE Vicksburg District Commander Col. Robert Hilliard said. “Their months of dedication exemplify the district’s unwavering commitment to this vital mission and its ability to adapt to fluid situations.”

The 2020 revetment season began with a virtual “Blessing of the Fleet” ceremony on July 21.

A thriving community is a reflection of those willing to step in when needed and Vicksburg will have the opportunity... read more