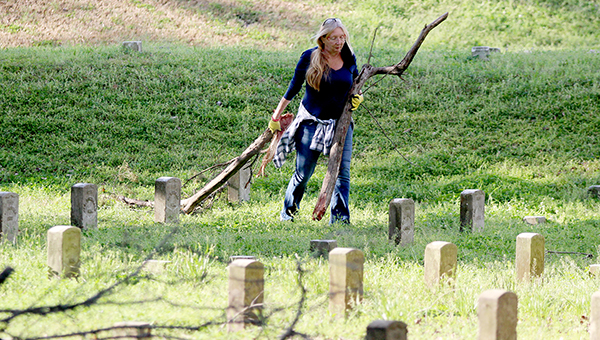 Susan Taylor, one of the 13 volunteers to help clean up the National Cemetery in 2021, drags large limbs from the rows of headstones. (Tim Reeves/The Vicksburg Post)

Brendan Wilson, chief of interpretation, education and partnerships at the Vicksburg National Military Park, said it was only fitting that a dedicated group of volunteers were at the National Cemetery Saturday, cleaning up an area set aside as the final resting place for thousands of volunteers.

“It is great to have people come back and engage in the park. What is particularly special is that a large number of the men buried here were volunteers. They volunteered to serve their country, so it is very fitting to honor their volunteer service by others coming together to serve them as volunteers,” Wilson said as a group of 13 volunteers worked to pull limbs and branches from the rows of headstones. “We are excited to have this, bring people out here, get them outside and be able to do it safely.”

The cleanup of the National Cemetery, where 17,000 Civil War Union soldiers are buried, marked the first organized event for the park since the beginning of the pandemic in March 2020. The event attracted 13 volunteers, from both Vicksburg and Louisiana.

The purpose of the cleanup was to clear debris from the winter storm that blanketed Vicksburg and Warren County in mid-February.

“Our maintenance guys went around and cut many of the downed limbs and branches and the volunteers today are dragging it to the closest roads so our crews can then load it in trucks,” Wilson said. “This is work to help our crews and to get the National Cemetery looking good once again.”