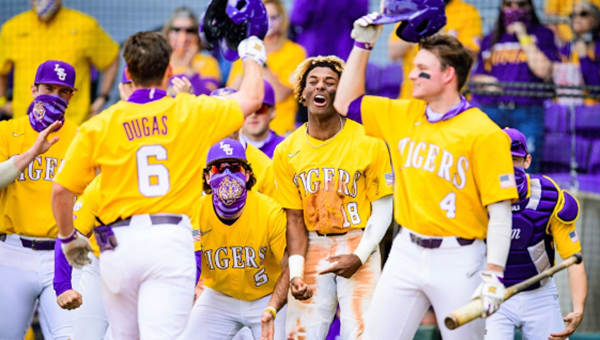 BATON ROUGE, La. — After three days in the freezer, LSU’s hitters warmed up just in time to salvage something out of their otherwise lost weekend.

Gavin Dugas hit a tiebreaking solo home run in the sixth inning, and LSU scored six runs in its last three at-bats to beat Mississippi State 8-3 Sunday in the finale of a three-game Southeastern Conference series at Alex Box Stadium.

“We had two hard-fought games prior to today that could have gone either way, but we didn’t hit enough to win the ball games,” LSU coach Paul Mainieri said. “We could have hung our heads, we could have pouted, we could have believed we couldn’t win in the SEC, but today we rode AJ Labas on the mound and Gavin Dugas gave us the lead with a huge home run.”

Mississippi State (16-4, 2-1) had to settle for winning two out of three against a top 10 conference opponent on the road. Bulldogs coach Chris Lemonis was disappointed not to get the sweep, but happy with the team’s overall performance.

“It was a good weekend. Today is a new day and I didn’t think we were really good today,” Lemonis said. “It was a little disappointing, but I give LSU credit. I would have liked to have seen us come out and give a better effort today.”

The Tigers and Bulldogs went back and forth early, trading the lead before MSU’s Tanner Allen tied it at 2 with a sacrifice fly in the third inning.

It stayed that way until Dugas belted a two-out, solo home run in the sixth inning to give LSU the lead for good.

The Tigers added three runs in the seventh inning, on an RBI double by Tre’ Morgan and a two-run home run by Brody Drost, and two more in the eighth on a double by Jordan Thompson.

Allen hit an RBI single in the top of the eighth to get a run back for the Bulldogs, but they could not keep up with LSU’s late surge.

Labas (1-0) pitched six innings for LSU, allowing two runs on six hits with one walk and three strikeouts. Reliever Devin Fontenot recorded his second save of the season, firing a perfect 1 2/3 innings.

Mississippi State reliever Jackson Fristoe (2-1) was charged with the loss. He surrendered one run and three hits in four innings, with two walks and six strikeouts.

Former Warren Central star Carlisle Koestler pitched two-thirds of an inning late in the game, but was roughed up. He allowed all three runs in the seventh inning and left after giving up Drost’s home run.

“That homer (by Dugas) loosened up our team quite a bit, and we got some big RBI hits later in the game to give us some cushion. We had some clutch hits, some extra-base hits, against the best pitching staff in the SEC,” Mainieri said. “Sometimes it just takes a little patience with young players, and you start to see the talent surface. I was just really proud of our guys, I’ve very happy for them. They hung in there, and they battled through the entire weekend.”

Mississippi State will host North Alabama in a midweek game Tuesday at 6:30 p.m., and then Arkansas in an SEC series beginning Friday night.

LSU will head to New Orleans to play Tulane Tuesday at 6 p.m., and then travel for an SEC series vs. Tennessee beginning Friday.

The NCAA men’s basketball tournament gets under way this weekend — otherwise known as America’s best four-day weekend of the... read more