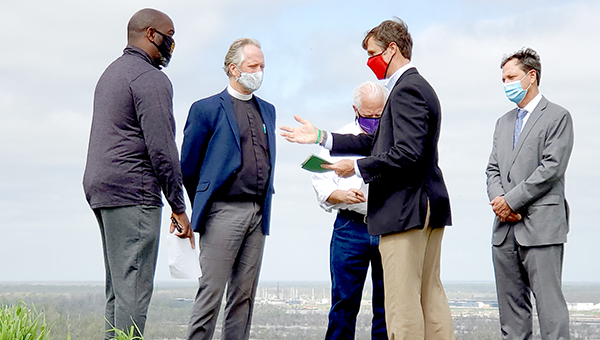 The service will begin at 7 a.m. The Rev. Andy Andrews, rector of Church of the Holy Trinity, and the Rev. Brian Crawford of City Light Church will each deliver messages during the service and music will be provided by Gibson Memorial United Methodist Church.

Normally, Doiron said, people would park at the Cairo Museum parking lot north of Fort Hill and taken by bus to attend the service at Fort Hill.

This year, he said, out of concern for COVID-19 people will park along Confederate Avenue, which intersects with Fort Hill Drive and runs along the east side of Fort Hill inside the park, and walk to the service.

“For the past 71 years, the YMCA has hosted an interdenominational Easter sunrise service for the greater community of Vicksburg,” Doiron said. “Traditionally held at the top of Fort Hill in the Vicksburg National Military Park, the service unites people of different faiths in celebration of our Lord and savior’s resurrection.”

In 2020, however, COVID-19 and the threat of severe weather forced the service to be relocated indoors at the Purks YMCA where equipment was set up to broadcast on V105.5 and streamed live through the YMCA’s and The Vicksburg Post’s Facebook pages.

This year’s service will be an in-person event. Masks and social distancing will be required of those who attend.

“We’ll adhere to all city of Vicksburg restrictions for the pandemic,” he said. “I think it’s going to be a neat way, especially what we’ve gone through the past few years, it’s going to be neat to get together as a community again and celebrate Easter.

The service will be canceled in the event of rain, “But we have had it where we have had the service and it rained 30 minutes later or it may rain 30 minutes before. It hasn’t been washed out since I’ve been here,” Doiron said.

For more information, call Doiron at 601-638-1071 or by email at phillipd@vicksburgymca.com.

DELTA, La. — For Delta, La., Marshal David Beckham, Zuma is more than a partner, she is part of the... read more