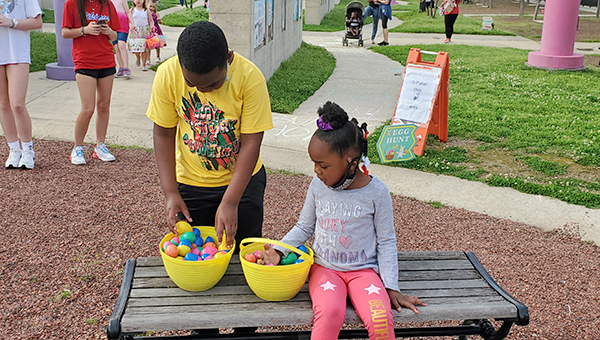 Braylen and Braylee Funches look over their haul at the Downtown Vicksburg Easter Egg Hunt on Saturday. More than 100 children hunted for Easter eggs at the Catfish Row Park. (John Surratt/The Vicksburg Post)

Caleb May reached into his basket of Easter eggs and pulled out two, causing a few others to spill on the sidewalk by the splash pad at Catfish Row park.

“I got a lot!,” he said as he looked at his collection. “I’m very happy! This is the happiest day of my life!”

Not far from Caleb, Princeton Henderson looked over his cache of eggs.

Caleb and Princeton were among the more than 100 children who traversed Catfish Row during Downtown Vicksburg’s inaugural Easter egg hunt. All of them were searching for the plastic eggs containing sweet treats that were scattered across the park.

The hunt included a visit from the Easter Bunny, who was mobbed by children waiting to hug him. The youngsters later lined up to have their picture taken with him after collecting their eggs.

“We put out 2,000 eggs and they were gone in 30-35 minutes,” Downtown Vicksburg executive Director Kim Hopkins said. “We had 20 kids show up after the hunt started.”

The Easter egg hunt was part of a Saturday program sponsored by Downtown Vicksburg Mainstreet that includes shopping specials at downtown merchants and live music in the downtown area.

Parents accompanying their children received eggs containing a treat and a coupon from a downtown merchant or a slip of paper promoting a give-away at a downtown store. The Easter Bunny also made an appearance for downtown shoppers.

One parent was heard telling their children, “We’re going shopping” as they headed in the direction of Washington Street.

“Everything went great,” Hopkins said. “The kids and the parents had fun. There was no rain. It was a gorgeous day and the breeze helped cool things down a bit. We’re looking forward to next year and see where we can make improvements.”