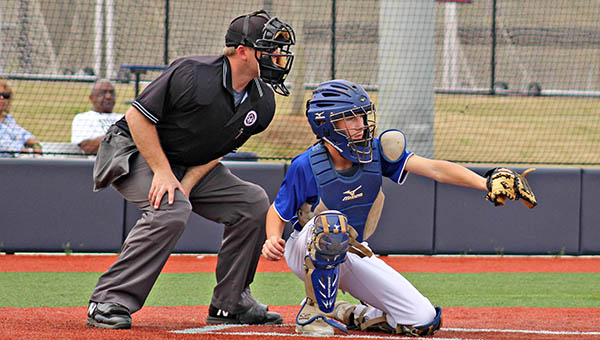 Porter’s Chapel Academy catcher Jon Wyatt Massey catches a pitch in front of umpire Christian Hales during a game in March 2020. It was among the last baseball games played in Mississippi before the COVID-19 pandemic led to the cancellation of the 2020 season. (Ernest Bowker/The Vicksburg Post)

Sports column: The world we left behind

We’re a year and counting into the COVID-19 pandemic. Depending on where you live, the “and counting” part might vary by a few weeks, but the generally accepted start date in the United States is March 11, 2020.

On that date, NBA star Rudy Gobert of the Utah Jazz tested positive for COVID-19 and caused the league to suspend its season, then-President Donald Trump took measures to close off international travel, and within a few days the world shut down in an effort to help us fend off an invisible attacker.

On that Tuesday we thought a Zoom call was a new slang term for a quick ring on the telephone. A facemask was a piece of football equipment, not a piece of everyday fashion. Bank tellers called the police on people wearing masks, instead of telling their customers to put one on.

We weighed the pros and cons of attending a ballgame on whether we had the time or money to do so, rather than local infection rates. Half-empty stadiums were the mark of a team in the middle of a dismal season, not the sign of slow societal rebirth.

We heard tales of famous people and loved ones getting the dreaded virus. Some did not recover. Many did. Gobert, whose diagnosis sent the sports world into a panic, is doing just fine. He has played every game this NBA season, was selected to the league’s All-Star team last month, and signed a five-year, $205 million contract extension in December.

By early 2021, a year after we entered this surreal reality, the most remarkable thing about it all might be how quickly we adjusted. We put on masks, we developed a vaccine and signed up en masse to take it, we all learned and obeyed new societal norms.

We left the world of March 10, 2020 behind, literally overnight, and if not embraced then at least accepted the world of March 12, 2020. So many of the things we took for granted 13 months ago are only now starting to return to us. Some might never come back.

Like a lot of people, I miss the old world. I want to be able to go to a ballgame or a movie without thinking about anything more than who or what is playing. I want to walk into a convenience store without having to double back to the car for a facemask.

Here’s hoping the second year of the pandemic is nothing like the first.