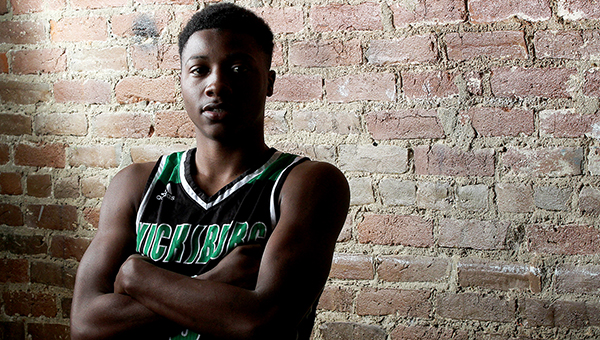 The 2020-21 Vicksburg High boys’ basketball team had a deep, talented roster with players who each had a unique specialty.

Guard Taylon Smith was a sharpshooting assassin from 3-point range, who could break a game open in a matter of minutes. Jaden Williams, a 6-foot-7 forward, played the big man role and was a Mississippi All-Star. Others, like Keshawn Brown and Anthony Lumpkin Jr., filled in the cracks, did dirty work, and picked up the scoring slack whenever it was needed.

One member of the team, however, did a lot of everything night after night and stood out among the rest. Point guard Sean Hardy was able to distribute, score, defend and rebound with a tenacity much bigger than his 5-foot-11 frame, and provided the Gators with a steady floor leader.

Hardy averaged 10.6 points, 5 rebounds, 4 assists and 2 steals per game while leading the Gators to the second round of the MHSAA Class 5A playoffs. Now he’s wrapping up his senior season by being named The Vicksburg Post’s boys’ basketball Player of the Year.

“It’s major. I didn’t expect to be Player of the Year. The hard work pays off and all that,” Hardy said, before passing out credit as if he was dishing the basketball to an open teammate. “Me and my teammates were grinding all year and I thought one of them were going to get it. They deserve it. We all put in hard work.”

Hardy’s all-around game and consistency was the engine that drove the Gators for most of the season.

They finished with a 15-8 record and reached the second round of the playoffs for the second year in a row before losing on the road to eventual Class 5A champion Holmes County Central.

Hardy scored in double figures most nights while also passing out assists and grabbing rebounds. He nearly had a triple-double, with 17 points, nine rebounds and eight assists, in an overtime win over eventual Class 6A champion Clinton — the Arrows’ only loss of the season.

During the postseason, Hardy scored in double figures in all four of Vicksburg’s games.
Hardy said that, as the Gators’ point guard, he just tries to set the tone for the team and do whatever it takes to win.

“I set the plays, I’m the point guard of the team, so when they aren’t getting it going I’ve got to get it going,” he said. “I’m a 5-11 guard and I’m rebounding and getting seven or eight assists and seven or eight rebounds every game. That motivates me. I’m outrebounding most big men.”

Hardy added that he enjoys playing bigger than his size. He’s a capable outside shooter, but learned early on in his basketball life that he was much more effective driving to the hoop to score and draw fouls.

“I get to the rack. I used to shoot growing up, but as I developed my game I feel like I get to the rack and score better. So I left the shooting to my teammates. That’s what they do, and I practice my game inside,” Hardy said.

Hardy’s next step is to play college basketball. Next week he plans to sign with Jones College, one of the top junior college programs in the state.

“I hadn’t decided what school to go to yet, but when Jones came and gave me that full ride I took it and I’ll be glad to play on the next level,” Hardy said. “As long as I contribute and help my team get wins, I’ll be good.”