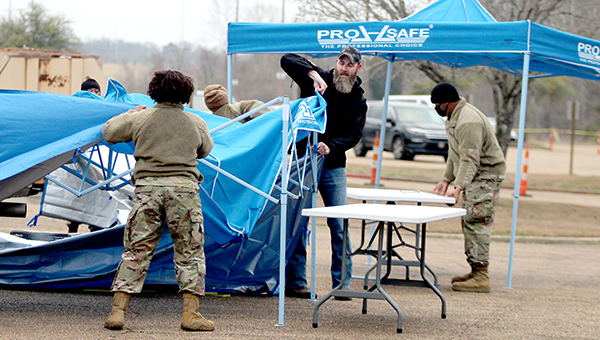 Members of the Mississippi Air National Guard and other personnel set up tents and tables to process patients through the Warren County COVID-19 vaccination site at Uptown Vicksburg on Feb. 1, the first day of vaccines being administered to residents. (Tim Reeves/The Vicksburg Post)

During their work session Monday, the Warren County Board of Supervisors voiced support to continue a key contract for the drive-thru COVID-19 vaccination site at the former Vicksburg Mall.

The site, which is managed by the Mississippi State Department of Health, has operated in the back parking lot of Uptown Vicksburg — formerly known as Vicksburg Mall — since early February. At the time, the site was the first hybrid site established in the state and since then, officials said, has become a model for the rest of the state.

The contract between the county and Uptown Vicksburg, which supervisors are expected to approve next Monday, allows the space for the vaccination site, utilities and office space for the site’s personnel at a cost of $1,300 per month. The contract, which will be retroactive to March 1, is for six months and can be terminated at any time.

“The county can terminate this contract if the site is no longer needed,” County Attorney Blake Teller told supervisors. “But in talking with (Warren County Emergency Management Agency Director John Elfer), he believes the site will be active through at least April, May and into June at this point.”

When the site began operations in February, it was administering up to 400 doses of the vaccine three days each week. Now, the site is administering as many as 800 doses each Monday, Wednesday and Friday.

Overall, state health officials have reported more than 18,000 doses of the vaccine have been administered to Warren County residents through a number of outlets, including the drive-thru site, as well as local doctors’ offices and clinics.