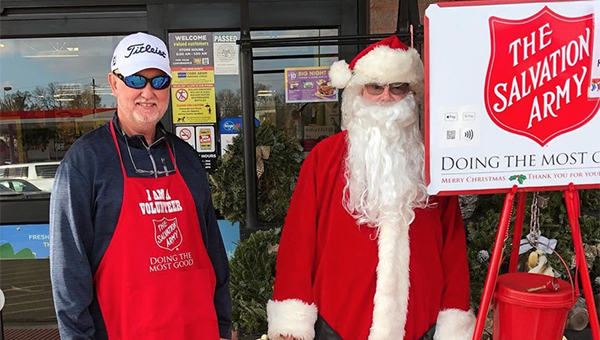 George Carr, Vicksburg businessman, was a member of the Vicksburg Kiwanis Club for 32 years. Here, he rings the bell for the Salvation Army, a volunteer project by the club. Carr died Monday after a lengthy battle with COVID-19. (Submitted Photo)

Vicksburg’s business community lost a giant, and a cherished Vicksburg family lost a loved one as George Carr died Monday after a lengthy battle against COVID-19.

“My precious dad went to be with Jesus today,” Heather Gibson, Carr’s daughter, shared on Facebook. “He fought the good fight, he finished the race and there is no doubt in my mind he heard ‘well done my good and faithful servant.’”

Carr, the owner of George Carr Buick, Cadillac, GMC, operated the dealership in Vicksburg for more than 30 years.

In 1989, Carr traveled from Nashville, Tenn., to Vicksburg to check out the town and a car dealership known then as Heritage Motors on South Frontage Road, and decided to stay.

“I came and visited Vicksburg, I liked the community,” Carr said in a 2014 interview with The Post. “Initially, I was thinking I was only going to be here for a few years, but in 1992, with the help of First National Bank and Mr. Earl Lundy, I borrowed money and bought my partner out. Since then, we’ve made this our home.”

Carr made a lasting impact on the community since his arrival in 1989. He was an active supporter of youth league sports and the Miss Mississippi Competition. He was also an active member of the Vicksburg Kiwanis Club.

David Blackledge, executive director of the Miss Mississippi Corporation, remembers Carr as a loyal and kind supporter of the competition.

“Just last week, George celebrated 32 years of membership in our Kiwanis Club, and his passing will leave a big hole,” Edney said. “During my time in Kiwanis, I have seen how active and engaged he was as a member who always worked to improve Vicksburg. Whether he was helping out with our annual Chili Feast to raise money for scholarships or ringing the Salvation Army bell at Christmas, George rarely missed an opportunity to serve his community.

“Personally, I’ve known George since my family moved to Vicksburg 30 years ago, where he was one of our first neighbors,” Edney continued. “Over the years, he was always kind and warm to me, and I am honored to have served Vicksburg alongside him in Kiwanis. He will be missed.”

Carr served as the Kiwanis Club’s president in 2005 and at times had served as a director on the club’s board.

Mark Buys, president of BancorpSouth in Vicksburg, and Carr shared a longtime friendship that began when Carr and his wife, Debbie, first moved to Vicksburg.

Buys, who was the senior vice president at First National Bank, helped Carr in his acquisition of Heritage Motors and remembered Carr as someone dedicated from the very beginning to being involved in the community.

“George came to town with a strong desire to be a significant member of our community and he was,” Buys said. “Most importantly, George was committed to his faith and belief in Jesus Christ as his Lord and Savior. We prayed together on numerous occasions and George was grateful for the Lord’s presence in his life and for the life given to him.”

Buys said his friendship with Carr was highlighted by a number of stories, but one, in particular, came to mind.

“When Judy and I married, my car desired a lot, and one day George called me and said he had a car for me that I wouldn’t be embarrassed to drive away from our reception,” Buys said. “It was just a loaner but he saved the day and made Judy and my day more special. Needless to say, my next car was bought from George.

“I will miss George during this brief separation,” Buys said. “But we will see each other again soon.”

“I’ve known Mr. George since I was a little girl and the words that come to mind when I think of him are genuine and sacrificial,” Anne Elizabeth said. “He always had something positive to say. He was always willing to give — and then give some more.

“He was the type of person that you just wanted to be around and the type of person who built others up and always saw good in everything and everyone,” she continued. “He wasn’t just a car dealer to me — he was a friend. I’m comforted to know that he is with the Lord and rejoicing with our Savior. His legacy will live on forever and I will never forget the life he lived and the love he always showed.”

The city of Vicksburg is borrowing up to $4 million to repair slide areas caused by heavy rains in January... read more