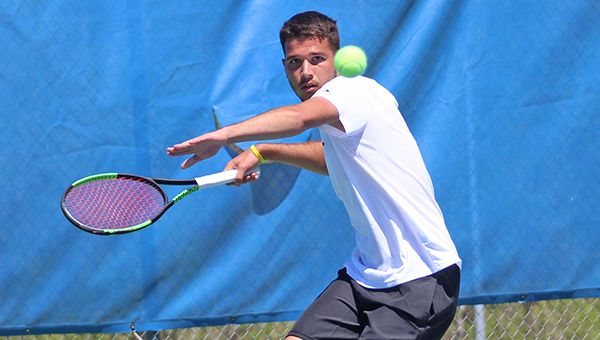 Alcorn State’s tennis team headed to its alternate home court in Vicksburg on Monday, but its visitors did not make it feel very welcome.

Alabama State won four singles matches in straight sets, and knocked off the Braves 4-1 in the men’s match at Vicksburg’s Halls Ferry Park.

Alabama State then swept the singles matches to earn the team victory.

Two other matches were left unfinished after Rodriguez’s victory clinched the team win for Alabama State. Chris Andre was leading Alcorn’s Pata 3-6, 6-1, 5-2 in the third set, and Du Preez was ahead of Stojanovski 6-4, 4-3 in the second set.

Alabama State also rolled to an easy win in the women’s match, 4-0, as it won three singles matches in straight sets and took the doubles point.

Alcorn’s top doubles team of Mikaela Konstantinova and Aizat Zholdakyeva came away victorious over Lizaveta Demchenko and Timothee Legaud by a count of 6-3.

The Lady Hornets, however, won the other two doubles matches as well as three singles victories including the match-clinching win by Bea Acena at No. 5 singles in straight sets (6-0, 6-2) over Kimberley Kaome.

Alabama State also led the other three singles matches when it clinched the victory. It did not drop a set in any of the seven singles matches, although Alcorn’s Konstantinova was leading Urska Velec 2-0 in the second set when their match was cut short.

Alcorn will host William Carey on April 7 in Lorman, and then compete in the Southwestern Athletic Conference Championships April 16-18 in New Orleans.

Alabama State will return to Mississippi to play Southern Miss Sunday afternoon in Hattiesburg, before heading to the SWAC Championships in New Orleans.