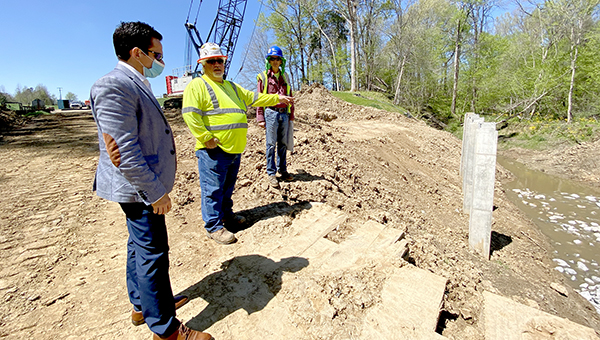 Despite delays brought about by rainy weather and a week-long snow and ice event in mid-February, the construction of a new road in Ceres Industrial Park is progressing.

Last week, crews with Hemphill Construction finished placing pilings needed for a bridge along the Ceres Boulevard extension, and hope to have the bridge’s decking in place next week. With the weather delays, officials now expect the road to be completed by mid-May.

The new road will take the current Ceres Boulevard further east between Tyson and Unified Brands, provide key access to the largest remaining site in the industrial park, site “B,” and make the overall park even more attractive to future investment and development.

“It’s really good to see it taking shape,” Pablo Diaz, Vicksburg Warren Economic Development Partnership president and CEO, said while looking over the project’s progress Monday. “It’s very satisfactory to see the road coming in because we know that it is going to open up opportunities to create jobs.”

The road project is being paid for primarily through grants from economic and legislative partners such as the Mississippi Development Authority, Delta Regional Authority and others. The MDA is providing a $406,605 grant and Entergy a $10,000 grant. The grants are reimbursement grants, meaning the port commission pays for the work and is reimbursed by the other agencies and organizations.

The bridge that is being built along the road that crosses over Crouches Creek and will eventually meander its way to the Big Black River will remove yet another hurdle keeping the site from being construction ready.

“There are many types of industrial parks and industrial sites and a ready-to-go industrial site is way more competitive than just a piece of land, with grass, or trees, even worse, a creek coming through it,” Diaz said. “So we are taking the steps to make this our largest site in Warren County at Ceres to be as ready for a project as possible and that means a lot.

In October, Diaz announced the Port Commission had accepted a $256,500 Delta Regional Authority grant. The grant, along with those from the Mississippi Development Authority and Entergy, will cover 80 percent of the project’s estimated $846,900 cost. The Port Commission pays 20 percent, or $173,795.

He said the entire effort to build better access to the site, and getting it and other open sites at the park better surveyed and certified, is all part of the Partnership’s work to better position the park and Warren County for development.

“This is part of the equation of eliminating an industry’s risk,” Diaz said. Because the answer you want to give to a prospective business is how fast you as a community can help this company go from spending money to making money. And the faster they go to making money, the faster they go to hiring people and the faster we get the benefit of them being in the community. “If you have a site that is going to take time and resources to try to get going versus a site that is ready to go, then all you need is to sign a contract and build the building, then they go from spending money to making money fast and it is a win-win for everybody.”

And, Diaz said, the road is just another example of the partnerships and relationships built in recent years all focused on economic development in the county.

“All of our partners at the Mississippi Development Authority, Entergy and consultants that we talk to are all aware of what we are doing. So as these things are progressing and we give them updates on what we’ve got, they start sending more projects, different projects because they know we have a site that is becoming available and also has the correct characteristics they are looking for,” Diaz said. “We are very thankful to the Delta Regional Authority, to Entergy Mississippi and MDA, because amongst them they are paying the largest majority of the costs to get this done for Warren County. That is what we are always trying to do, leverage resources.”