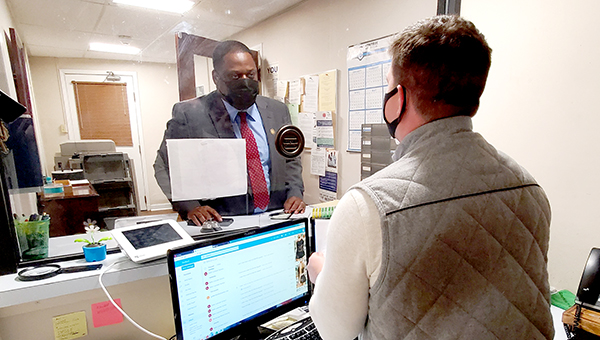 If Vicksburg is going to move forward into the future, Willis Thompson said, it is going to have to change its form of government.

Thompson said based on his experience in city government as an employee and a member of the Board of Mayor and Alderman the city needs more representation on the board.

“We need to have more representation in the city and we need more people like you and more ideas on our board of aldermen or city council,” he said.

If elected, he said, “I’m going to want to change the form of government.”

“We don’t need a board of just one, two, three people,” Thompson said. “We need to divide the city up into sections where we have smaller areas of representation. The people then have somebody they can go to with issues. I think having a smaller area can do a whole lot more for the people.”

The final decision on changing the government and its form, he said, would be up to the people.

The commission form was approved by the Legislature in 1908, and was popular with many major cities, including Biloxi and Jackson, until the 1980s, when problems caused by growth made the system ineffective and its at-large elections did not meet the one-man, one-vote rule under federal elections.

Two other cities, Clarksdale and Charleston, have commission forms of government, but they have five-member boards and the commissioners are elected by district. Vicksburg managed to comply with federal voting laws by establishing north and south wards.

Flaggs attempted to change the form of government in May 2015, but Thompson and North Ward Alderman Michael Mayfield opposed the move. Thompson said he has since had a change of heart after being out of city government and observing the board.

Thompson was the only candidate to discuss the city’s form of government as the candidates each discussed their qualifications and presented information on their platforms.

Kimble, a former Vicksburg police lieutenant outlined his experience as a businessman and a police officer and how they can help him as mayor govern the community.

The candidates answered one question involving their first 90 days in office.

Flaggs commended Thompson for his comments on changing the form of government before saying, “As your mayor, I’m going to run this city the best way I can” during his first 90 days in office.

Jackson said she would start improving city operations, while Hollingsworth said he would work for better cooperation between the city and the Warren County Board of Supervisors to approve a tax abatement policy for new construction and building improvements.

Thompson would look at the city’s structure of departments for better service. Kimble would work to find the problem areas in city government and work to improve them before moving forward.