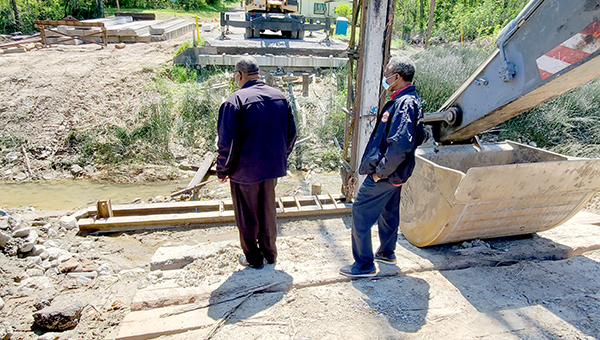 North Ward Alderman Michael Mayfield, left, and District 2 Warren County Supervisor William Banks look over the equipment at the Zollingers Hill bridge. Work is underway to repair the bridge, which has been closed since 2019. (John Surratt/The Vicksburg Post)

North Ward Alderman Michael Mayfield and District 2 Warren County Supervisor William Banks stood on the approach to the Zollingers Hill bridge and looked across at the eastern bank of Glass Bayou.

The bridge that once spanned the bayou is gone, leaving a large gap in the road that will soon be connected by a new bridge built by Warren County using State Aid bridge funds two years after being closed by Mississippi State Aid Road and Bridge Program engineers.

“In 30 days this will all look different,” Banks said as he looked at a piling that was driven into the bayou’s bed and the stack of concrete decking sitting across the bayou from him. He said the project contractor began the job three weeks ago.

Because the bridge is a State Aid bridge, Warren County is responsible for the repairs.

Zollingers Hill is a one-way street on a steep hill and connects Sky Farm Avenue and Martin Luther King Jr. Boulevard. It is a popular shortcut for people living on Sky Farm and neighboring streets to the east to get to Martin Luther King.

“It’s amazing how important a half-block or a block is to some people,” Mayfield said. “I’ve gotten a lot of complaints about that bridge being out.”

The bridge was built in the 1980s to replace a wooden bridge, Mayfield said, adding “I called it (the wooden bridge) the ‘swinging bridge’ because it would swing when you crossed it.”

The second bridge was initially closed in March 2018 as unsafe because of damage to one of its wooden pilings. The problem forced the Board of Mayor and Aldermen to declare an emergency to fix the bridge.

Fordice Construction completed repairs in July 2018 and the bridge was reopened with a 3-ton weight limit. It was later closed again.

The Board of Supervisors in November 2019 advertised for bids to permanently repair the bridge with concrete pilings.

“In 2020 we started getting the bids and getting things lined up with the state through State Aid,” Banks said.

He said the project was scheduled to begin in March 2020 and take 45 days, but several problems, such as weather, slowed the progress.

When the contract on the bridge was approved, Banks said, Stantec was the project engineer. When the new board was elected in 2019, it hired Neel-Schaffer as county engineer, and the company had to get information on Zollingers Hill from Stantec.

“That was another delay,” Banks said. “We had to wait for them to get their paperwork. We also had to get rights of way along the street.”

The delays, he said, cost the project months.

“If Stantec still had the project, we would have been finished by the last part of last year because they had done all the preliminary work,” Banks said.

Mayfield said the city assisted in the project by moving and relocating utility lines in the area of the bridge.

“We’re glad to get everything lined up and finally get these people taken care of,” Banks said. “It’s (the bridge) coming; it’s almost (across). In the next 30 days, you should see it.”

All voters — regardless of affiliation — can take…