King was ‘catalyst’ that pushed Vikings to a Top 10 ranking 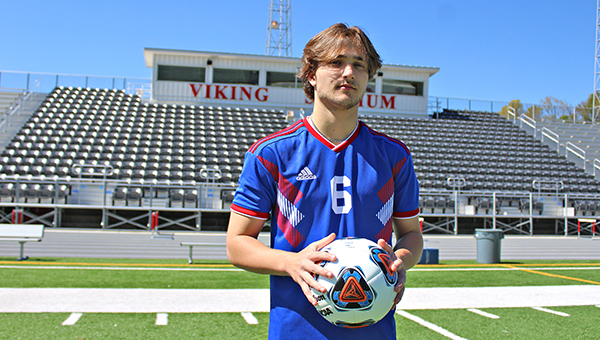 Warren Central's Tony King is the 2021 Vicksburg Post All-County boys' soccer Player of the Year. King scored 23 goals and had five assists to lead Warren Central to a 14-5-1 record and a top 10 ranking in MHSAA Class 6A. (Ernest Bowker/The Vicksburg Post)

When it comes to soccer, Tony King always has one eye on the goal and the other looking over his shoulder.

He’s not only scanning for any opponents that might try to catch him from behind, but competitive teammates trying to take his spot as Warren Central’s top goal-scorer.

“I know everybody out here is practicing and working, and working hard to come for my spot and go past it. So I’ve got to keep getting better to stay ahead,” King said.

So far, he’s managed to stay at least a couple steps in front of the pack.

King, a junior striker, totaled 23 goals and five assists to lead the Vikings. Coach Greg Head called him “a catalyst” for the team’s offense, and now he can also be called The Vicksburg Post’s boys’ soccer Player of the Year.

“It’s a big deal, but you can’t let it go to your head,” King said of winning the award. “You’ve got to take it and keep moving forward, and just know that at any time anybody can take that spot from you. You’ve got to keep working and maintain.”

King had his best season so far in his third as a starter for the Vikings. He surpassed the 20-goal mark for the second year in a row, and has 49 goal for his high school career.

Getting nearly 50 is a lot, too, and he and Head said it’s the product of natural ability enhanced by hard work and hours upon hours of practice.

King is constantly working to improve his craft and adds to it a drive that allows him to play at a high level against some of the toughest competition in Mississippi. Warren Central finished with a 14-5-1 record this season, in a region that included both MHSAA Class 6A North State finalists.

“There’s a saying that great players are not born on the field, they’re born in the backyard. Well, obviously this kid works when he’s not at practice because his skills are just way above everybody else’s,” Head said. “And he pushes everybody. When he steps on the field, whether it’s a practice or a game, he’s giving it 110 percent.
“It’s all-out for him, and that’s why he’s so good,” Head continued. “When he gets in a game, he’s so used to playing at that intensity level that it’s not a big deal for him. He plays 110 percent and he makes everybody better because the defense has to work so hard to contain him.”

Heading into this season, King said he worked to improve his foot skills and finishing. His leg strength also got better, which gives him more velocity and range on his shots.

Most of all, however, he said he’s constantly honing his ability to outwork every opponent he comes across.

“The main thing I’ve gotten better at is practices and endurance, and being able to play the whole game without coming out,” King said. “Another thing is confidence. When you’re out here practicing every day and getting your skills better, you take it into the game. Since you’re doing it in practice 24-7 it just feels natural. You don’t have to think about it. It just happens.”

King is beginning to sort through a number of college options. It’s too early to say for sure where he’ll wind up after his high school career is over, but it seems certain he will play somewhere at the next level.

“He’s probably been one of the better players to come through here in a long time,” Head said. “There’s no telling what he can do next year or where he wants to go. He’s had coaches looking at him since he was in ninth or 10th grade.”