Profile 2021: When fake snakes are the best snakes 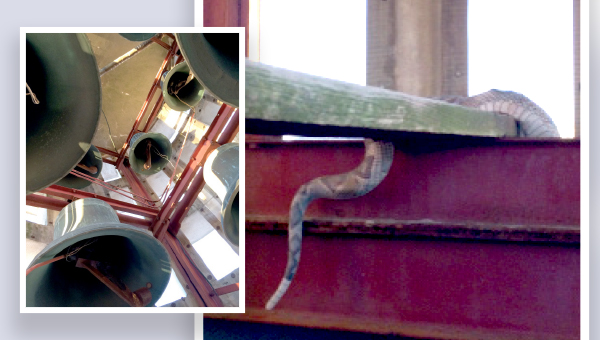 In 1849, downtown Vicksburg was transformed with the building of St. Paul Catholic Church. The church was one of the first in the state to be built of brick. The steeple, complete with a bell, allowed the church to be visible from several streets away.

As the church’s congregation multiplied, the church building grew finer with detail. It was soon complete with statues and stained glass windows.

The city was able to enjoy this Gothic Revival style church for more than 100 years. In December of 1953, a tornado hit Vicksburg, destroying many downtown buildings. A pre-decorated St. Paul Catholic Church was affected traumatically, and the building was eventually demolished.

By 1957, a new church had been built — the one that stands today. This one did not have the same Gothic Revival look, but it has a tower that stands 100 feet tall.

At the top is a bell tower and, above that, a limestone ball made by the Woolery Stone Mill in Bloomington, Ind.

The last time anyone went to the top of the tower was when parishioner Conrad Rabalais redid the mechanical system for the bells in 2014.

Before that, they were having trouble with pigeons getting into the tower. The screen built to avoid this problem was not enough, so Wayne McMaster placed a fake snake and a fake owl to scare them away.

“He did it because it’s open-air up there. There are screens to keep birds out, but sometimes birds will still get in,” Rabalais said. “He put the owl and the fake snake up there to try to deter pigeons from roosting up there.”

McMaster is a long-time member of the church. Over the years, he has been in charge of taking care of the bells and replacing the organ.

Rabalais compared the fake snake and owl to a scarecrow placed in a field.

“It’s like putting a scarecrow in a cornfield. It probably scares away some birds,” he said.

The bells used today are the same ones that were installed in the 1950s. Only the technology of the control system has changed. Thanks to dedicated parishioners of St. Paul — and the help of a couple of convincing decoys — the bell tower will remain unharmed.