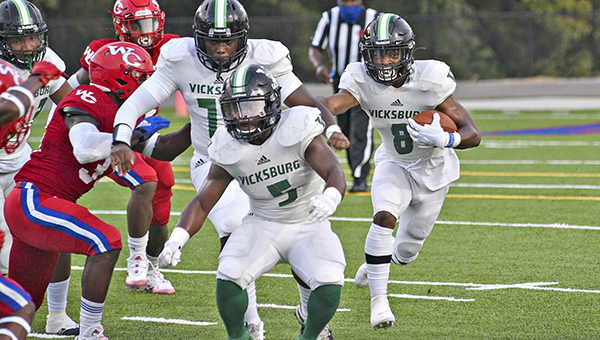 There’s good news for fans of the Vicksburg Gators and the Warren Central Vikings — the Adidas gear they’ve been sporting is good at least through June 2025.

The new contract, much like the current one, is designed to give each school’s athletic teams their own look, while keeping consistent school logos and colors. And, it gives the District the opportunity to purchase uniforms and equipment at steep discounts compared to retail pricing.

Vicksburg Warren School District Athletic Director Preston Nailor, in a letter to the Trustees asking them to approve the new contract, called the relationship between the District and Rex Team Sports and Adidas “a great success.”

“We have had great success the past four years with branding our schools, as well as supplying our athletic programs with quality gear and apparel,” Nailor wrote.

He also said the move to Adidas in 2017 simplified much of the uniform and apparel process.

“It allows us to set our identity here in Warren County. Before we had, like, five different greens at Vicksburg, and at Warren Central we had some wearing Nike, some wearing Russell, some wearing Adidas,” Nailor said. “It really just solidifies our identity so when people step off the bus or see us in the gym or on a field, they know who we are.”

Nailor also said the contract allows coaches to have more control of their uniform styles, rather than having to use stock looks from other apparel and uniform providers.