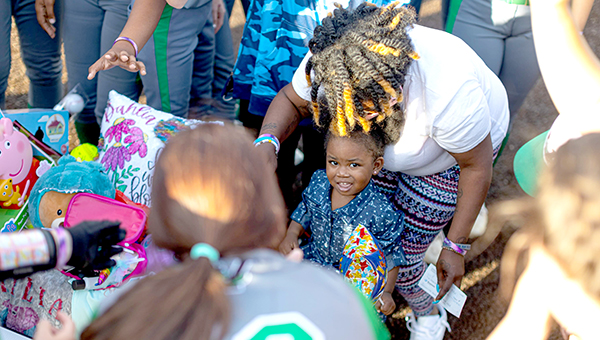 Proceeds raised from fans enjoying a few high school softball games added up to a major contribution to a local family who is battling cancer.

On March 27, the Vicksburg Missy Gators hosted their annual Strikeout Cancer benefit softball tournament, with proceeds from the tournament going to a family affected by cancer. This year, the team chose the family of Dahlia Grissom, 2, who was diagnosed with Diffuse Intrinsic Pontine Glioma in August.

Thursday, before the Missy Gators’ home game against Enterprise-Lincoln, the team gathered on their field and presented Dahlia’s family with $6,000, the largest amount ever raised from the annual tournament.

Dahlia was joined on the field by her mother, Tina, and her brother, D.J.