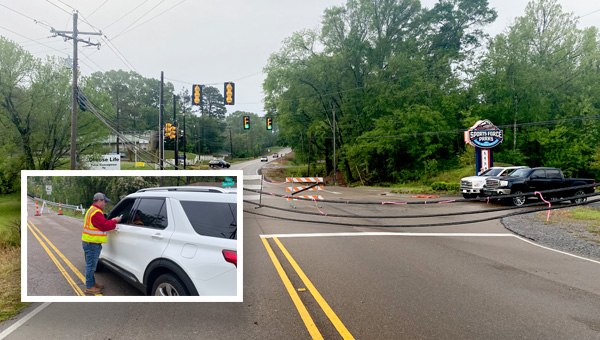 South Ward Alderman Alex Monsour meets with travelers along Fisher Ferry Road Saturday morning, providing them directions around a downed power pole and lines that closed a portion of the road and blocked easy access to Sports Force Parks on the Mississippi.

Crews with AT&T have arrived to fix lines knocked down at around midnight when high winds and heavy rains all but destroyed a power pole along Fisher Ferry Road near the entrance of Sports Force Parks on the Mississippi.

The downed lines have blocked traffic along the busy thoroughfare near the bridge and put at risk a baseball tournament at the park that has attracted teams from throughout the region.

Without an easier secondary access road to the park, those traveling south on Fisher Ferry Road to get to Sports Force Parks have had to take a detour, bringing them back along Grange Hall Road.

Helping provide directions to those who reached road closed and detour signs, and who are not familiar with the area, was South Ward Alderman Alex Monsour.

“We have 12 teams from out of town who do not know all the ways to get around the bridge,” Monsour said. “We have been meeting with every car trying to get to the park and dropping pins to help them with the detour. If we were not out here doing this, there’s a good chance the tournament would be a disaster.”

The severe weather that raced through the area late Friday and into Saturday morning brought with it high winds — well above 60 miles per hour — and heavy rains that threatened flash flooding in some areas. Because of the all-turf fields at Sports Force Parks on the Mississippi, tournaments are often not affected by overnight rains that would otherwise make natural dirt and grass fields unplayable.

While Sports Force Parks on the Mississippi is busy throughout the week hosting local youth leagues, the field’s biggest economic impact comes from hosting large tournaments.

Strong accusations: Monsour, Mayfield accuse each other of lying,…