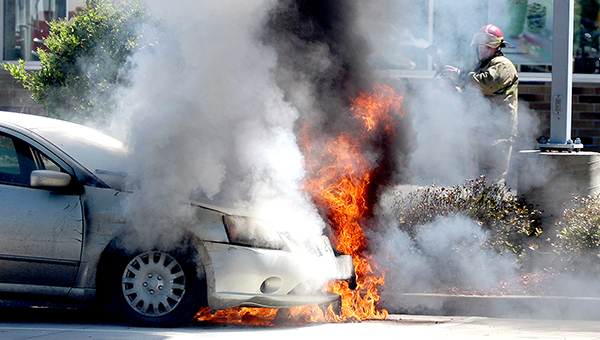 Fire leaps from the engine compartment of a vehicle parked near the McDonald's location on Clay Street Monday. Firefighters with Ladder 3 responded to extinguish the fire. (Tim Reeves/The Vicksburg Post)

Operations at the McDonald’s location on Clay Street were briefly suspended Monday as emergency units responded to a vehicle fire in the restaurant’s parking lot.

Shortly after 11 a.m., the Vicksburg Fire Department was dispatched to the fire that had engulfed a 2004 Mitsubishi Gallant. No one was injured.

The crew from Ladder 3 responded and extinguished the blaze that reportedly began in the vehicle’s engine compartment before moving to the rest of the vehicle. Deputy Chief Trey Martin and Rescue also responded. Martin was in the area at the time the call went out and arrived moments before Ladder 3 did.

The damage was limited to the vehicle itself and at no time threatened any other vehicles or the building.