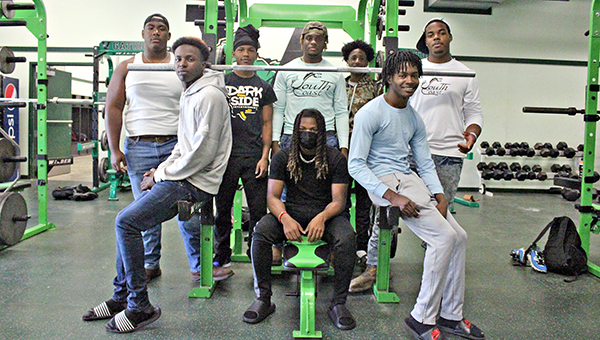 Gators confident as they chase Class 5A powerlifting championship

When they talk about their abilities, some of the members of Vicksburg High’s powerlifting team sound a bit cocky.

A few moments later another senior, Matthew Chase, added, “I’ve got one person close to me, but I don’t ever lose.”

As the saying goes, though, it’s not bragging if you can back it up, and this group of Gators certainly can. Eight of them have advanced through two rounds of qualifying to reach the MHSAA Class 5A state powerlifting meet Saturday in Jackson. Six of the eight, including Montgomery and Chase, have either the best or second-best qualifying totals in their weight class.

The success they’ve had so far has the Gators eyeing not only a handful of individual state championships, but a long-awaited team title as well.

“I have a lot of confidence,” said Tommy Curtis III, who has the top qualifying marks in the 220-pound weight class. “All of my teammates are putting in the work, all of my teammates are coming to practice, and we’ve all put in a tremendous amount of work. I really feel like, especially with Jimbo (Nowell) being our coach, we have a good chance at winning.”

Vicksburg has won two powerlifting state championships, in 2003 and 2006. The latter was the school’s last team state title in any sport. The powerlifting team had chance to break the drought in 2020, after most of its lifters advanced to the North State meet. Then the COVID-19 pandemic hit, the state meet was canceled, and the opportunity vanished into thin air.

Now, with most of the same crew returning, they’re determined not to let it happen again.

“It really feels amazing, because football excelled but we didn’t really excel how we’re supposed to. Powerlifting, we really did good. We did good last year, and I feel like we’re going to do even better this year,” Curtis said.

The Gators’ chances at a team title rest on two things — quality and quantity. Winning the team championship rests not only on winning a few individual weight classes, but racking up second- and third-place points among those who don’t.

Six teams in the Class 5A meet have at least six lifters competing, but few are as loaded with championship contenders as Vicksburg.

“We have eight, (Pearl River Central) has nine. Out of the 12 weight classes, we have seven kids that can finish first, which is pretty amazing if you think about it. We should have five that should probably get first, and two others that will get either first or second and it’ll be really, really tight,” Vicksburg coach Jimbo Nowell said. “On paper, we look good.”

Vicksburg’s roster is split evenly among the various weight classes, with four lightweight lifters who will compete Saturday morning at the Mississippi Coliseum and four heavyweights who will compete in the afternoon.

Jaheim Truitt (114 pounds) and Quin Rowan (132) are the top seeds in their weight classes. Nick Mickey (148) is the No. 2 seed, and Collin Johnson (132) is fourth. Rowan and Johnson being in the same weight class means Vicksburg has a maximum of seven first-place finishes that are possible.

The Gators’ real strength, however, rests with their heavyweights. Curtis has lifted 130 pounds more than his nearest challenger in the 220-pound division, and Montgomery is 240 pounds ahead of the No. 2 seed among super heavyweights who weigh in at 308 pounds and above.

Chase is the No. 2 seed in the 275-pound division and Jaylen Hicks is No. 3 in the 242-pound class, but both are close enough to the top to challenge for first place.

Even those that don’t win, Nowell said, should provide the Gators with enough points to be in the mix for the team title.

“If we get five first-place finishers, and two seconds and a fourth, it’s going to be hard to beat us,” Nowell said. “Nobody else is going to win five first places. The hay’s in the barn, so to speak. We’ve done all the work. We just need to go out there Saturday and have a great day.”

A handful of individual athletes from Warren County started to emerge as state championship contenders in the latest round of... read more