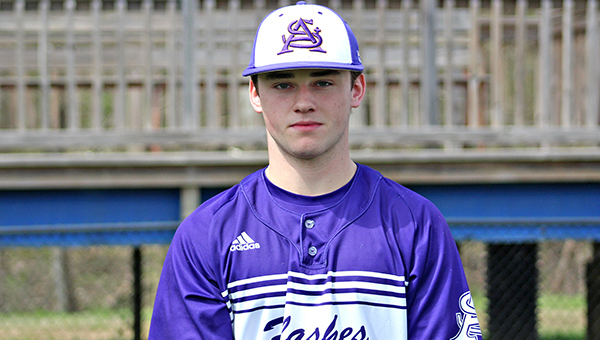 St. Aloysius' Wes Warnock went 5-for-10 and extended his hitting streak to 18 games in a doubleheader against Central Hinds on Friday.

One nightmarish inning turned an outstanding evening into a so-so one for St. Aloysius’ baseball team.

Central Hinds used six walks and some timely hits to score 10 runs in the bottom of the fifth inning Friday night, wiping out a five-run deficit and sending it to a 13-8 victory over St. Al in the second game of a doubleheader at Sports Force Parks.

The Cougars’ rally gave them a split of the doubleheader. St. Al rolled to a 15-1 victory in game one as Wes Warnock tripled and scored two runs, Brandon Steed and Cole Autrey had three RBIs apiece, and Ben Raines went 2-for-4 with four RBIs.

Adam Francisco allowed one run and struck out five in a five-inning complete game.

Game two started off well for the Flashes. They scored three runs in the top of the first, three more in the third, and stretched their lead to 8-3 on back-to-back RBI singles by Warnock and Steed in the top of the fifth.
And then everything fell apart.

Starting pitcher Carter Magee walked the first two batters he faced in the bottom of the fifth. Warnock replaced him and walked the next two to force in a run. Tristan Wilbanks then took the mound and gave up a run on a botched fielder’s choice and issued another walk.

Central Hinds then mixed in four singles, and scored two runs on a wild pitch and a dropped third strike. When the dust settled, it had scored 10 runs to surge in front 13-8, and that wound up as the final score.

In all, the three St. Al pitchers walked 11 batters in the game.

Walker Smith and Luke Knight drove in three runs apiece for Central Hinds (16-12, 8-7 MAIS District 3-4A), and Kent McArthur was 2-for-4 with a double, two RBIs and two runs scored.

Warnock went 3-for-5 with three RBIs for St. Al, and extended his hitting streak to 18 games. Autrey doubled and drove in two runs, and Conner Paxton was 2-for-3 with one RBI and two runs scored.

Central Hinds’ comeback gave it a win in the season series with the Flashes (16-9, 6-7), and a No. 3 seed in the MAIS Class 4A playoffs. It will play the second-place team from District 4-4A — either Brookhaven Academy or Silliman — in a first-round series beginning Tuesday.

St. Al earned the No. 4 seed from District 3-4A and will play either Brookhaven Academy or Silliman in the first round.