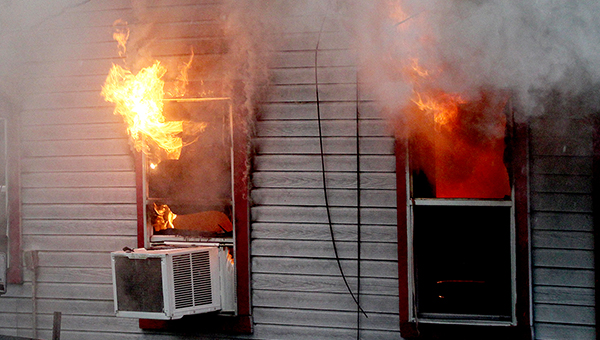 Flames leap from windows in a Grammar Street home Friday afternoon. The home, located in the 2100 block of Grammar Street was heavily damaged in the afternoon blaze. (Tim Reeves/The Vicksburg Post)

The cause of a Friday afternoon fire that heavily damaged a home at 1215 Grammar St. remains undetermined, Fire Chief Craig Danczyk said Saturday.

“The occupant of the home gave us some good information so we could have some more information Monday on the cause and origin,” he said. “It was an older home and had fire in the attic.”

The fire occurred erupted around 4:45 p.m.

Danczyk said Vicksburg-Warren 911 dispatched fire trucks moments later and flames and smoke were visible when the first units arrived. The occupant of the home was not at home at the time of the fire and no one was injured, he said.

He said Engine 6 was the first truck to arrive at the fire and the crew began attacking the blaze with the water available in the pumper’s tank. When Engine 7 arrived, he said, it was able to establish a water supply using a hydrant about 3-400 feet from the home.

Besides engines 6 and 7, Platform 1, Rescue, the battalion chief and Danczyk responded to the fire.