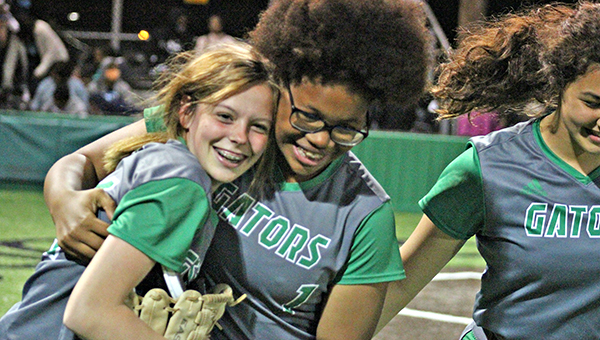 For a while, the Vicksburg Missy Gators appeared headed for disaster.

Needing only to win the game or lose by less than 10 runs against Ridgeland to win the MHSAA Region 4-5A softball championship, the Missy Gators watched as the Lady Titans smacked the ball around with ease, circled the bases at will, and amassed a nine-run lead.

Seemingly down and out, and with their championship hopes fading, the Missy Gators found a spark that turned into a raging inferno.

Vicksburg scored four runs in the fourth inning and three more in the fifth to get back in it.

Then, in the sixth, Lexi Kistler’s RBI single capped another big inning ­— and an even bigger comeback — as the Missy Gators came all the way back to beat Ridgeland 11-10 and claim the Region 4-5A title.

“It’s pretty awesome. It doesn’t matter who you play, when you play or how you do it, winning a district title is big. That was one of our goals this year was to win a district championship, so that’s goal No. 1 down,” Vicksburg coach Brian Ellis said.

Monday’s win gives Vicksburg a first-round bye in the MHSAA Class 5A playoffs that begin Friday. It will most likely face New Hope in a second-round series beginning April 26, with Game 1 at New Hope and Games 2 and 3 April 27 at Vicksburg.

New Hope is the runner-up in Region 2-5A. It also received a bye because it is matched up with the third-place team in Region 3-5A, which only has two teams in it.

“I feel like we can go pretty far,” Kistler said of Vicksburg’s playoff outlook. “I’m not sure what the other teams look like, but I think we have a decent chance.”

The Missy Gators have one regular-season game left, Wednesday at home against Germantown, and will hope the momentum from Monday’s win carries through that game and into the postseason.

After a scoreless first inning, Ridgeland scored twice in the second, three times in the third and four times in the top of the fourth to take a 9-0 lead. Sydni Stevens was 4-for-4 in the game with four RBIs, while Kaitlyn Hill drove in three runs with a double and a home run.

Vicksburg beat Ridgeland 16-2 last week, so Ridgeland needed a matching run-rule victory to have a chance at winning the region title through a tiebreaker. Once Vicksburg picked itself up off the mat, the Titans couldn’t even salvage a victory.

The Missy Gators scored four runs in the bottom of the fourth, with two coming across on singles by Kistler and Madelyn McAdam, to stave off the immediate danger of a run-rule loss. That small surge also flipped the momentum of the game 180 degrees.

Ridgeland was retired in order in the fifth and the Missy Gators struck for three more runs, on an RBI single by McAdam and a two-run single by senior Jamie Ward, to cut it to 9-7.

Stevens hit an RBI double in the top of the sixth to push Ridgeland’s lead back to 10-7, but it left two runners in scoring position. Then, in the bottom of the sixth, the Missy Gators loaded the bases with no outs.

Avery VanNorman hit a grounder to second and Kellisia Walker nimbly avoided a tag to save an out as a run scored. Another run crossed the plate on a wild pitch, and Charli VanNorman hit an RBI single to tie it at 10.

Finally, with two outs, Kistler ripped an RBI single up the middle to give Vicksburg its first lead of the game, 11-10.

“It feels so nice. I’m so happy. I thought I was going to cry if I got the third out,” said Kistler, who finished the game 3-for-5 with two RBIs. “We knew we could do it, because we’ve done this before. We’ve gotten more than nine (runs) in one inning. We just had to keep it up and not get down on ourselves, and that’s what we did.”

McAdam finished things out from there. After coming in to relieve a tiring Kistler in the pitcher’s circle in the sixth inning, McAdam struck out five of the seven batters she faced.

McAdam also went 3-for-5 at the plate, with three singles, two RBIs and two runs scored.