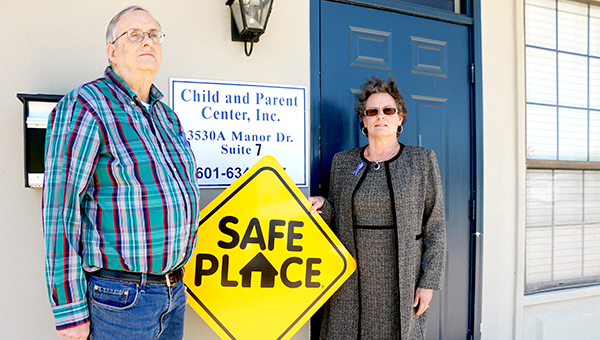 With their innocence and naivety, children are vulnerable to danger — danger that at times lurks behind the closed doors of their own home, leaving them with no protection.

Neglect and abuse happen all too often in the U.S., with thousands of children becoming victims of unthinkable offenses each year.

Randy Gay, executive director of the Exchange Club of Vicksburg Child and Parent Center, a non-profit organization that works towards eradicating child abuse and neglect in the area, said this year his organization has served more than 174 children with more than 80 cases still active.

With the mission to prevent child abuse and neglect in the community, Gay said, the CAP Center has put blue ribbons out this year at local coffee shops, banks and donut shops to make people aware April is National Child Abuse Prevention Month.

The CAP Center was started 36 years ago by the Vicksburg Exchange Club civic group and is one of the United Way of West Central Mississippi’s partner agencies.

The funds they receive from the United Way, Gay said, go toward parenting and children’s mentoring programs, as well as the agency’s court-appointed special advocate/guardian ad litem (CASA/GAL) programs. The CASA/GAL programs provide court-appointed advocates who make recommendations in the best interest of the child.

Oneka Washington, who serves as the CASA coordinator for the CAP Center, said she has been a CASA/GAL for nearly four years.

“Serving as a CASA/GAL is very rewarding in that you get to meet and serve our most precious jewels — children — and it also affords you the opportunity to change a child’s story one story at a time,” Washington said.

However, the job is not always easy. Some days, she said, are like being on a roller coaster.

“Sitting in a courtroom and listening to intimate details on why a child had to be removed from its family can be emotional,” Washington said. But, she said, there are those times when the ride is worth it.

Washington recalled a case involving three children that dragged on for years, but by not giving up, they were eventually reunited with their mother.

“And they are living happily ever after,” Washington said.

To get parents back on track, Gay said, the Rev. Troy Truly offers parenting classes for men and women separately at the CAP Center.

“(Truly) uses a curriculum that is faith-based and strives to show the individuals the best way to behave with each other and keep their anger under control,” Gay said. “This is a 15-week program and then certificates are given out so the parents can go back to youth court and have a chance at getting their children back in the family setting.”

Both Gay and Washington said the CAP Center is in need of volunteers who may be interested in serving as a CASA/GAL.

Those interested must be at least 21 years of age, consent to local and national background checks, go through 30 hours of training, and have “a compassionate and objective heart for people,” she said.

For more information about the CAP Center or the CASA/GAL program, call 601-634-0557 and ask for Washington, Avis Phillips or Antoinette Selvy. These women, Gay said, are also available to come and speak to any groups or clubs about what the CAP Center does and how volunteers could become CASA/GALS.

“Most of the time, the initial appointment (with a child) can be gut-wrenching, but at the end of the day, you know you will be making a difference in a child’s life through your advocacy,” Washington said. “Seeing a child smile because your recommendation is keeping them out of a situation that was bringing them harm is most rewarding. The heart of your advocacy begins at that moment because, in addition to serving as a voice for that child, you will also be working with an entire family unit trying to encourage them to do things differently.”

St. Aloysius was cruising along toward a relatively easy victory in its baseball playoff opener when it entered what seemed... read more