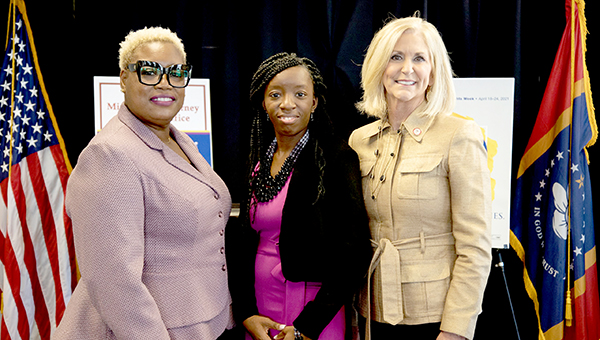 The awards ceremony is one of the many ways the Attorney General’s Office is observing the 40th anniversary of National Crime Victims’ Rights Week, emphasizing the importance of leveraging community partners statewide to help care for and support Mississippi victims of crime.

As noted in the Proclamation, this week “provides an opportunity for all to recommit to ensuring that accessible, appropriate, and trauma-informed services are offered to all victims of crime to help them heal on every level: physically, mentally, emotionally, and spiritually, and to help them rebuild their lives so they can re-enter society as a whole person with restored dignity.”

Among those honored was Krystal Hamlin, with Haven House Family Shelter in Warren County, who was named the Mississippi Coalition Against Domestic Violence awardee.

In a release from Fitch’s office, Hamlin, Haven was described as “committed to an enhanced service delivery system for victims and survivors in our state. This is accomplished by continuing to build partnerships; assisting shelter programs in building capacity; conducting trainings and educational opportunities; bringing awareness; conducting local, State, and National systemic advocacy; and highlighting the shelter services as well as the advocates who support victims and survivors.”

“Krystal Hamlin has served at Haven House Family Shelter for the past four-and-a-half years. She has assisted many victims of domestic violence in obtaining protection orders, filed charges against abusers, and most importantly, advocated on the local and state level for victims,” Mississippi Coalition Against Domestic Violence Executive Director Wendy Mahoney said. “She facilitates the Coordinated Community Response Team in Warren County to bring key service providers together to make sure that the resources and system responses to domestic violence are implemented within the community. Her dedication and passion is far-reaching as she is a dedicated advocate for those who need empowerment, support, refuge and resources.”