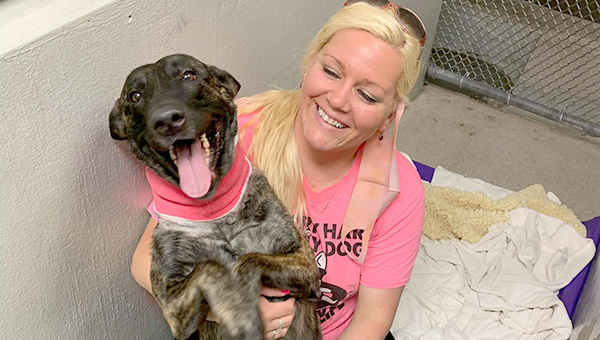 Zuma, a K9 officer owned by Delta Marshal David Beckham and his girlfriend, Nikki Williams, underwent heart surgery to correct a Pulmonic Stenosis, a congenital heart defect, that has limited her work alongside Beckham in recent months.

“She is out of surgery and we went back to ICU for when she woke up so she didn’t freak out and they said her recovery from waking up went super smooth since we were there,” Williams said. “She did great during the surgery and the procedure worked like a charm.”

“The doc said her heart looks great and it’s pumping wonderfully. The balloon went in smoothly and everything went as it should,” Williams said. “She will not be able to work for at least a month.  We have to schedule to come back for a follow-up echocardiogram in a month.”

“She would get disoriented and start to wobble and then fall,” Williams said in a previous interview with The Post.

After a round of tests, the heart defect was discovered.  The heart condition significantly limited Zuma’s patrol work, limiting her mainly to those calls involving narcotics.

In March, Williams created a GoFundMe page to help raise money to pay for the expensive surgery.

In days, nearly $4,000 was raised through the site to cover most of the expected expenses.

In addition to the $3,975 raised through the GoFundMe site, the couple received another $790 that was contributed through Protecting K9 Heroes, an Illinois-based group focused on providing essential equipment to K9 officers.

Williams said any money raised for Zuma that was not used would be donated to Protecting K9 Heroes “so they can continue helping beloved police K9s in need.”

“I do know we would not have been able to do all of this so quickly without the help and support of everyone who’s donated and prayed. It’s truly been a blessing for David and me,” she said in a previous interview.