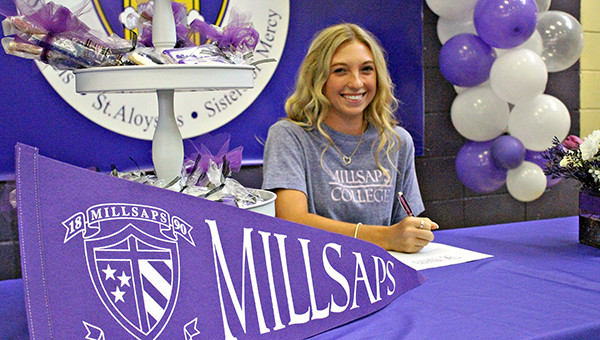 When she started to really evaluate her college options, Natalie Burke cycled through the pros and cons of several schools. Every time, she kept coming back to one name on the list — Millsaps College.

The Jackson school had everything she wanted academically, and when they gave her one other opportunity it sealed the deal.

“Then I started talking to them and they said you can definitely come run track for us,” said Burke, a senior at St. Aloysius. “I knew that was something I really wanted to do, so when the opportunity came to get an amazing education and also continue my track career, I was like, ‘How can I pass this up?’ That’s two things that are very important to me.”

She couldn’t pass it up. Burke verbally committed to Millsaps’ track and field program in March and made her decision public Tuesday with a signing ceremony in St. Al’s cafeteria.

Millsaps is an NCAA Division III member and does not offer athletic scholarships. Burke, who has a 4.3 GPA and scored a 23 on the ACT, will get an academic scholarship, however, as well as a guaranteed spot on the track team.

“It’s exciting. A little scary. A little nerve-wracking. But just really exciting to get to continue my sport and not let it end at high school. I’m excited I get to keep competing and keep going,” Burke said. “It’s extremely humbling. I know it’s taken me a lot of hard work to get here, and this is like it all paid off. So it’s really amazing and a great feeling.”

Burke has established herself as one of the top track and field athletes in the Mid-South Association of Independent Schools throughout her high school career. She won the Class AAA long jump championship as a freshman in 2018 and finished third in 2019, reached the state meet in the triple jump three times — her best finish was third in 2017 — and has qualified in the 200 meters but never medaled.

Despite her success, Burke said she was still stunned when colleges began recruiting her. In addition to Millsaps, she said the Mississippi University for Women and several junior colleges showed interest.

“It’s kind of crazy. It’s like, ‘You want me on your track team?’” Burke said with a laugh. “I’ve been doing it a while and I’ve won meets, but I’m always like, ‘I know this girl and she’s better than me, or that girl beat me the other day,’ So sometimes I just have to sit here and say ‘Wow.’ It is really amazing that these colleges want me and that I’m going to Millsaps and running.”

Competing on the Division III level was also attractive, Burke added. She acknowledged that her best marks are good, but not the type of world class performances that elite Division I track and field athletes often post. She feels Division III offers a chance to compete and contribute.

“I talked to the coaches there and I will be able to compete on their level,” Burke said. “That’s what made Millsaps so attractive. Rather than a Louisiana Tech or an LSU where I might come in 20th at a meet, I might be able to place in the top five. That’s a lot more exciting and relatable in my opinion.”

Before she heads to Millsaps, Burke has some unfinished business to attend to. She qualified for the MAIS Class 4A South State meet in the long jump, triple jump, 200 meters and the three sprint relays. She was hoping to advance to next week’s Class 4A state meet and snag a few more medals — and possibly another state title — before exiting the high school stage.

“I’m really excited for this season,” she said. “I’ve already qualified in six of my events to go to South State. I have some tough competition, but I’m ready to go out there in my senior year with another win.”