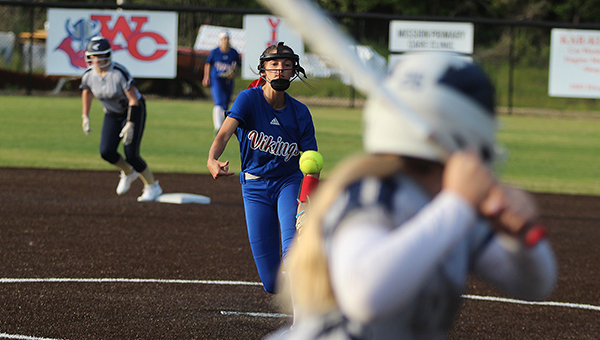 For the first time in 20 years, Warren Central’s softball team played its final game of the regular season with the knowledge that there would not be another until next spring.

Perhaps with that in mind, it sailed into the long offseason on a high note.

Warren Central waited out eight walks in the bottom of the fourth inning and scored 13 runs in the frame to rout Franklin County 15-3 in its season finale Thursday.

Franklin County’s pitchers walked 11 batters in the game, and the Lady Vikes only had five hits. Kamryn Morson drove in two runs, one of them on a single that ended the game via the mercy rule in the fourth inning.

Mary Evelyn Hossley pitched a complete game for Warren Central and finished with seven strikeouts. Karlee Wallace went 2-for-3 and drove in all three of Franklin County’s runs.

“It’s a great way to end the season,” Warren Central coach Dana McGivney said. “I hate that their other pitcher couldn’t come tonight and it might have been a better ballgame, but they had to do what they had to do. For them this game didn’t mean a whole lot for them, but for us it meant a whole lot.”

The Lady Vikes (10-12-1) missed the playoffs for the first time since 2001, but at least has a bright future to look forward to. There were only four seniors on this year’s roster, and nearly the entire regular starting lineup was underclassmen.

After taking some lumps and some tough losses — four of their 12 defeats were by one run — McGivney is hopeful the best is still to come for this young group.

“We’ve been having a lot of ups and downs. We’ve played really well in some games and still didn’t win. So just to come in and finish the season with a victory is always something to build on for the future,” McGivney said.

McGivney added she was looking forward to a full offseason to work with her players. Last year’s summer schedule was canceled because of the COVID-19 pandemic, which might have contributed to some of this season’s unevenness.