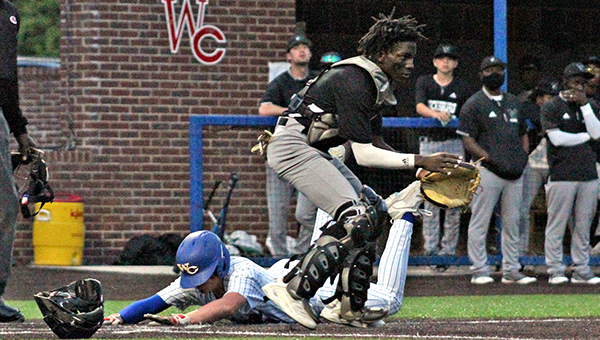 Floyd Davenport went 4-for-4 with a double, triple, three RBIs and three runs scored, and Warren Central ripped a dozen hits while taking advantage of a long string of Vicksburg errors to rout the Gators 15-0 on Thursday.

Warren Central (9-16) won its fifth game in a row, all via the mercy rule. It has outscored its opponents 67-2 during its winning streak.

“We talk about focusing on the process and not focusing on the results. That’s throwing strikes, making routine plays and attacking the fastballs. That’s something I’ve been getting in their ear about,” Warren Central coach Randy Broome said. “We talk about hustle, compete and be a good teammate. I think all of that finally meshed together, where we were focused on this pitch, ambushing fastballs in fastball counts, throwing strikes, and when the ball was hit we made routine plays.”

Vicksburg (9-10), meanwhile, will limp into the MHSAA Class 5A playoffs having lost two in a row to Ridgeland and Warren Central by a combined score of 34-2. The Gators will host Center Hill in Game 1 of a first-round series next Thursday.

Coach Antonio Calvin said he wanted his team to shake off its recent slump in a hurry, but let the memory of Thursday’s lopsided defeat linger for a long time. Vicksburg has lost 12 consecutive games to Warren Central in a streak that started in 2013. The Gators have scored a total of four runs in their last six games against WC.

The Vikings’ latest blowout of their crosstown foe lasted only three innings. After easing out to a 2-0 lead in the bottom of the first inning, they smacked four extra base hits — including three consecutive doubles by Ismael Trujillo, Davenport and Braxton McCurley — to push the advantage to 7-0.

“You’ve still got life as long there’s outs to be made,” Broome said. “I don’t know how many two-out runs we had. That last inning it was three or four, at least. It’s just doing your job and handing it to the next guy.”

Trujillo, McCurley and Blake Channell all finished with two hits apiece for Warren Central. Trujillo, Channell and Jack Wright each had two RBIs as well.

Mayson Shealy threw a three-inning no-hitter for the Vikings. He struck out four batters and faced one over the minimum, with a third-inning throwing error keeping him from a brief perfect game. Shealy threw just 37 pitches, 25 of them strikes.

For his team, Calvin said there was no doubt what led to the game going off the rails. The Gators committed six errors that led to eight unearned runs. In one sequence in the third inning, Davenport went from second to third when the throw back to the pitcher tipped off of Terrance Johnson’s glove. Davenport then scored when Johnson’s throw to third got away from the third baseman.

Two pickoff throws to first also resulted in errors that led to runs.

“Errors. Errors, errors, errors. We had nine errors on our count. Throwing errors, fielding errors. We hit fastballs all day every day. We look amazing hitting fastballs. Tonight, I don’t know if it was the atmosphere, but we came out tight. We didn’t make the routine plays we were supposed to make,” Calvin said. “In that second inning we gave up five errors because of that error at second base. This has been the story of our life all season long. It’s the routine stuff, the mundane stuff, the stuff that’s supposed to be programmed into you, that we’re hit or miss on.”

The St. Aloysius Lady Flashes cleared one final bar on their way to the MAIS Class 4A state track meet.... read more