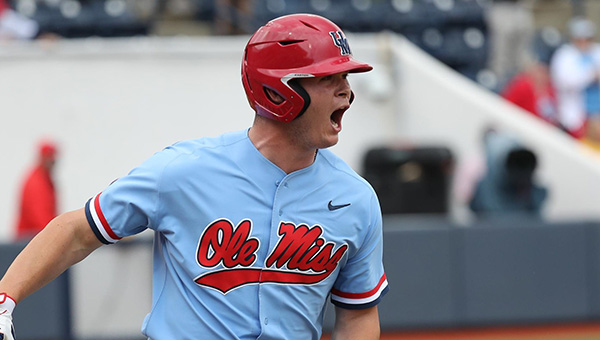 OXFORD — It didn’t rain Saturday in Oxford, but there were plenty of late-afternoon showers.

Ole Miss scored eight runs with two outs in the bottom of the eighth inning to tie the game, and then freshman Kemp Alderman hit a walk-off home run in the ninth to give the Rebels an improbable 10-9 victory over LSU.

It was Alderman’s first college home run, and could not have come at a better time. Ole Miss (28-12, 10-8 Southeastern Conference) went from the brink of being swept at home to salvaging the finale of the three-game series and gaining a huge momentum boost.

“We knew the game wasn’t over with the lead that we had, and I was concerned because Ole Miss has a great hitting team, and this was a very hitter-friendly environment. They’re never out of a game in this ball park,” LSU coach Paul Mainieri said. “We used five true freshmen pitchers in the game today, and they all competed as hard as they could. We just couldn’t get to the finish line, unfortunately.”

LSU (24-15, 6-12) scored in each of the first five innings to build a 9-1 lead — Gavin Dugas and Jordan Thompson both homered — and seemed headed toward an easy win as they maintained their advantage into the eighth.

T.J. McCants led off the bottom of the eighth with a single for Ole Miss, but the next two batters were retired. Then the Rebels got rolling.

McCants scored on a single by Jacob Gonzalez and Peyton Chatagnier hit a three-run home run to cut it to 9-5. A hit batter, walk and single loaded the bases as McCants came up for the second time in the inning, and he hit a grand slam over the center field fence to tie it at 9.

The ball was carried just over the center field fence by a stiff breeze that kicked up when the ball was hit.

“Honestly, I thought it was going to be a pop up,” said Thompson, LSU’s shortstop. “The wind was blowing in 10 seconds before the pitch was thrown. He hit and I was like, ‘OK, (center fielder Giovanni DiGiacomo) going to track that one down and it just cleared the fence out of his reach.”

LSU managed to stop the Rebels’ rally there, but left a runner of its own at second base in the top of the ninth. Then Alderman came to the plate in the bottom of the ninth and hit the first pitch into the right center field bleachers as fans heaved their drinks into the air in celebration.

It was the first home run of Alderman’s college career, and just his second hit. He played his first game earlier in the week against Little Rock.