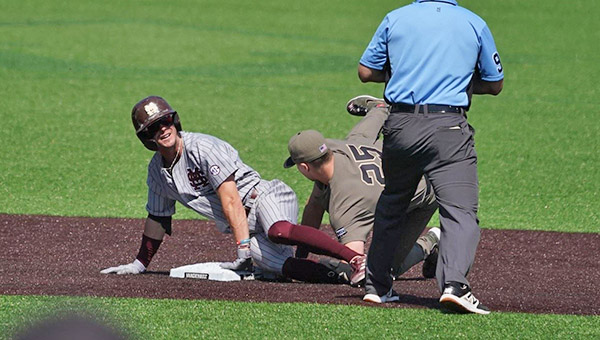 NASHVILLE — Mississippi State’s offense petered out after a fast start, and its hopes of a huge Southeastern Conference series win faded with it.

The Bulldogs fizzled after grabbing a big early lead, and No. 2 Vanderbilt scored seven unanswered runs to win 7-4 Sunday in the series finale between top-five teams.

No. 4 Mississippi State (29-10, 11-7 SEC) lost two of three games on the weekend, snapping a streak of three consecutive series victories.

“I feel like we are close. We are still a work in progress and not where we need to be. We have to get better if we want to achieve the goals we set for ourselves,” Mississippi State coach Chris Lemonis said. “Now that school is out, we will have some more time to work and focus on baseball. Our guys have done a great job and are a tough group of kids who have responded to everything all year. We know there are still areas we can improve upon to become a better team.”

Tanner Allen went 3-for-5 with a home run and a double for Mississippi State and Scotty Dubrule had two RBIs. The Bulldogs, however, only had two hits after the third inning and could not hold an early 4-0 lead.

Carter Young tripled and scored a run in the fourth inning, and then hit a three-run home run in the fifth to give Vanderbilt a 5-4 lead. Enrique Bradfield Jr. added a two-run single in the sixth to make it 7-4.

Vanderbilt reliever Nick Maldonado finished the game with 3 1/3 scoreless innings. He struck out four batters and retired 10 of the 11 batters he faced, and earned his third save of the season.

The only MSU hitter to reach base against Maldonado was Luke Hancock, who led off the seventh inning with a walk. Logan Tanner hit into a double play on the next pitch.

Southern Miss jumped out to an early lead in the second as they scored two runs on one hit. Blake Johnson drove in the first run by being hit by a pitch, and Dustin Dickerson the other with a single.

Western Kentucky scored twice in the third to tie it, and then Southern Miss went back in front 3-2 on Christopher Sargent’s solo home run in the bottom of the third.

Then, in the fifth, Western Kentucky scored five runs to take the lead for good. Ray Zuberer hit a two-run double and Kevin Lambert an RBI single during the rally.

Justin Carlin added a solo home run in the eighth inning as the Hilltoppers padded the lead late. Carlin finished 3-for-4 with three RBIs.