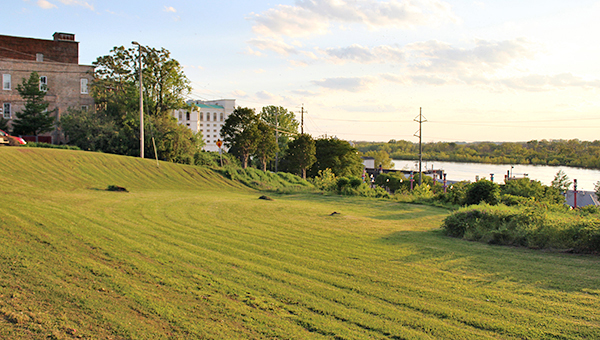 An open patch of grass in downtown Vicksburg is home to a rabble of swarming gnats. Trust us, they're there. (Ernest Bowker/The Vicksburg Post)

Sports column: I, for one, do not welcome our new insect overlords

While covering the Vicksburg vs. Ridgeland softball game last week, I noticed all five of Ridgeland’s infielders doing what appeared to be a choreographed dance routine.

It was different, but rehearsed cheers are a big part of softball culture so why not dancing? Maybe they combined the two into a new art form, I figured.

A few seconds later I realized the truth — they weren’t dancing, they were shooing.

Yes, folks, it’s that time of spring when we welcome back our outdoor friends, the gnats. These little bugs swarm on golf courses, baseball and softball fields, and generally anywhere good times are had and a patch of natural grass exists.

While leaving our office on Washington Street the other day I noticed a group of gnats — cloud or horde, both very fitting, are the appropriate terms according to the internet, although I rather enjoy the alternate term of “rabble” — gathered near our office. I’m sure that rabble was up to no good.
I tried to take a picture, but photographing gnats in fading sunlight is almost as difficult as keeping them off you.

This week I’ve been swarmed by them at 9 a.m. at Clear Creek Golf Course, swallowed a few for lunch in downtown Vicksburg, and swatted some away at Bazinsky Field. At the aforementioned softball game I stayed low and still and they mostly left me alone. Perhaps they were enjoying the dancing on the field too much to bother me.

Gnats are some of the most annoying insects around. Mosquitoes are awful, but you don’t feel every bite at least. Gnats can also bite, and then fly into your ears, nose and eyes. The real jerks are the ones that buzz close enough to your head to get you to smack yourself like an idiot. You just know they’re laughing to all of their buddies.

I know the COVID-19 mask mandates have worn out their welcome for a lot of people, but they do have one benefit. A mask will keep you from swallowing a gnat or having one fly up your nose. Sometimes the latter path leads to swallowing. We’ve probably all gained a pound or so this week from this.

There’s not much we can do, sadly, to reclaim the world from our new insect overlords. Gnats seem to be seasonal, and this is their peak. We just have to wait them out.

In the meantime, does anyone have any cool gnat dances? Maybe we can put them on YouTube or TikTok, get them to go viral. Might as well put them to work for us while they’re here.