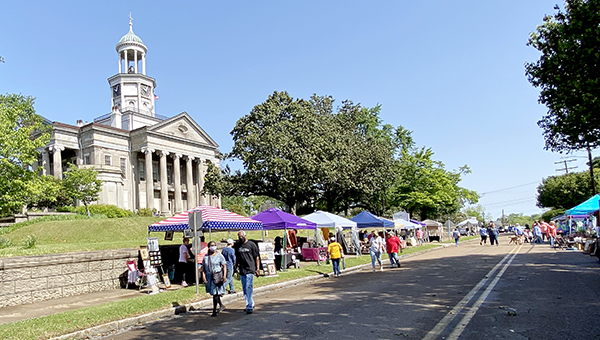 Aided by good weather Saturday, the Old Court House Museum’s spring flea market proved successful, a year after it was postponed due to the early days of the COVID-19 pandemic.

“It was a wonderful day,” Old Court House Museum Director and Curator Bubba Bolm said. A total of 88 vendors and 14 food-based vendors participated in the flea market, all spaced 6-feet apart to support social distancing.

“We lost some of the vendors because the weather didn’t make a change until a few hours (before the market opened),” he said. “But the vendors who were here had a good day. They sold most of their goods; quite a few of them sold out.”

The flea market is held twice a year — in the spring and fall — and serves as the museum’s largest fundraiser. The fall market will be held Oct. 2, Bolm said and it usually averages 200 booths.

Forecasts of wet weather caused problems for this  year’s market, Bolm said, as the different forecasts apparently may have raised concerns in the minds of out-of-town vendors whether there would be an event.

“Weather forecasts were varied and it was possible from some of the forecasts that we saw that the rain would continue through Saturday morning, but that wasn’t the case,” he said.

When Bolmn and historian Jordan Rushing arrived at the museum Saturday morning, he said “The forecast started to change. I looked out and it was great. It was a good day; very nice. It was good to see happy faces out on the street.”

The Warren County Board of Supervisors on Monday said the county’s existing COVID-19 emergency orders will likely be allowed to... read more