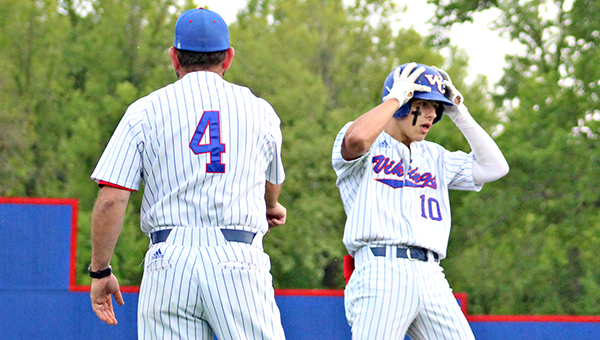 Warren Central's Blake Channell (10) stands on third base after hitting a triple against Vicksburg. Game 1 of Warren Central's MHSAA Class 6A baseball playoff series vs. Tupelo was postponed on Thursday. The teams will play Friday night in Tupelo instead. (Ernest Bowker/The Vicksburg Post)

Because of rain and thunderstorms in North Mississippi, Game 1 of the best-of-three MHSAA Class 6A series was postponed Thursday. It will now by played Friday at 6 p.m. at Tupelo, and the schedule for the rest of the series has been altered as well.

Rain is forecast in the Vicksburg area most of the day Friday, but it is clear for Tupelo which is about 200 miles northeast of Vicksburg. Combined with showers and light rain Thursday in Tupelo, Warren Central assistant coach Derrick DeWald said the decision was made to simply shift the series a day to avoid bad weather altogether.

Saturday’s forecast for Vicksburg calls for clear skies and warm temperatures in the low 80s.